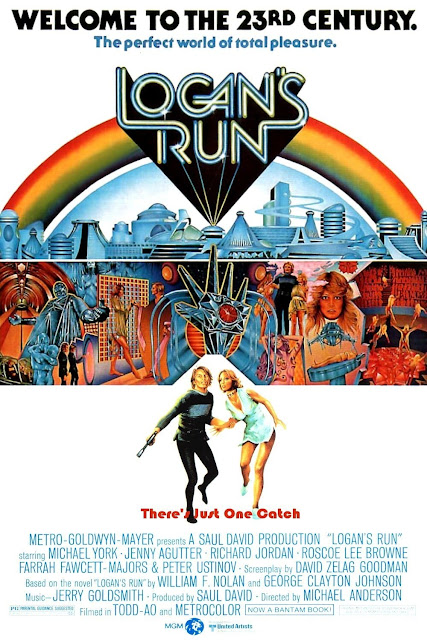 All for the love of renewal, it’s Burl, here to review a movie that epitomized the state of studio sci-fi in the years leading up to Star Wars! That picture is of course Logan’s Run, and with its big budget yielding dinky-toy trick effects and a costume design composed mainly of pajamas, we must nowadays regard it as more of a curio than anything else! Ha ha, it’s hard to believe that Blade Runner came along only six years after this!
The big hook of this picture, as we all know, is the concept: it’s two hundred years into the future, the world has been irrevocably changed by nuclear war or some environmental catastrophe, everyone lives a life of pleasure in a big shopping mall, but, once you turn thirty and the little jewel in your hand starts blinking red, it’s time for Carousel, where you put on tights and a hockey mask, fly around the room for a bit, then explode in sparks! Ha ha!
Michael York, whom we know from Phantom of Death and the remake of Not Of This Earth, and Richard Jordan from Dune, The Mean Season and The Hunt for Red October, play two sandmen, the police in charge of finding and killing anyone who may run from this sparky fate! They make a habit of toying with their victims, which makes them seem very nasty I must say! But when Michael York’s Logan meets Jessica, played by the comely Jenny Agutter from An American Werewolf in London, and gets an assignment he can’t refuse from the unfair city computer, he finds himself on the run, blinking red before his time, dodging his ex-friend Francis, and the laser beams of the demented cosmetician Doc (who reminded me a bit of the Surgeon-General of Beverly Hills from Escape From L.A.); scampering through the Love Shop and avoiding the depredations of the towering, silver, fearsome lunch robot Box! Ha ha!
Waiting for Logan and Jessica outside the city dome is not the Sanctuary they’d been led to expect, but a dotty old cat-loving jasper played by the great Peter Ustinov from Spartacus! Francis shows up, unable to comprehend that everything he’d learned in the dome was a lie, and he has a freakout, but a quick flagpoling settles his hash, ha ha! Later, when Logan and Jessica bring the old duck back to the dome, Logan brings these truths to the city computer as he had to Francis, and it has a freakout too, and simply blows up!
Now it’s true that I enjoy this picture, that it’s campy and fun; but it’s equally true that it’s silly and unwieldy and poorly-structured and ponderous! Had it been made with dexterity and a thoughtfulness that went beyond the obvious surface-level chase narrative, and with some specific, passionate vision of human nature, it might really have been something! As it is, I give Logan’s Run two fish, sea greens, and plankton from the sea! Ha ha!
Posted by Burl at 13:28