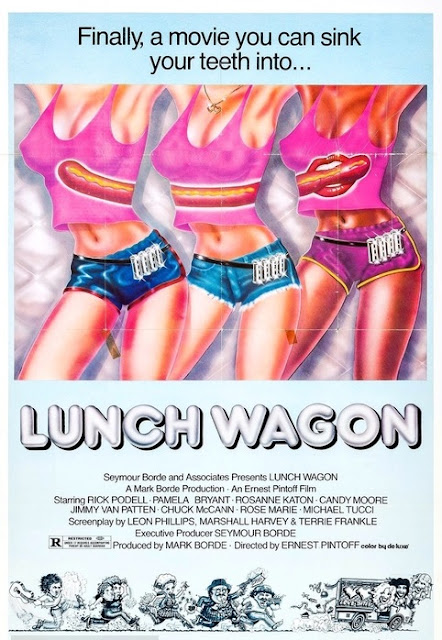 Vroom vroom, it’s Burl pulling up in a big pink Lunch Wagon! Yes, that’s the title of today’s motion picture experience, and let me tell you: if there’s a better movie made on the subject of construction site lunch wagons, I’ve yet to see it!
Ha ha, this is a picture very much in the tradition of the Roger Corman “three girls” pictures he was making in the 70s, in which you have three nurses, or three teachers, or three stewardesses, and they would have comic, romantic and dramatic, or even political, adventures! Here we have two young ladies, Marcy and Shannon, who pump gas at a garage owned by big George Memmoli, the size-large from Mean Streets and Phantom of the Paradise! But he’s a nasty boss, and a peeping tom, so when they inherit a food truck from Dick Van Patten, the girls waste no time! They recruit a third partner, a musclewoman called Dierdre, paint their truck pink because they are ladies, and start up their own business serving comestibles out of their new conveyance!
Movies of this type are frequently loose, shambling and free from the burdens of narrative, but Lunch Wagon by contrast suffers from a surfeit of plot! Whereas one gang of bumbling, comedy-relief criminals is plenty for a picture like this, Lunch Wagon offers two such groups! In fact the whole thing seems to be comic relief rather than simple comedy; that is, comedy that doesn’t feel it has to try too hard, as it’s just meant to be lighter than the dark material around it! But there is no dark material here, nothing to be relieved from, and so the gags on offer give no relief, nor no laffs, ha ha!
In addition to the criminal groups (one, a loose collective of nogoodniks using their own lunch truck as cover to steal gold fillings from a gold filling factory; the other a pair of hefty, mustachioed jewel thieves who look like the Mario Bros., and especially so when they happen to be dressed as janitors), the girls face romantic travails! Marcy has her ups and downs with shirtless construction worker Biff, played by another Van Patten, this one called James, whom we know from Roller Boogie and Nightforce; Shannon makes time with a musician in a traveling band with whom the girls get acquainted; and Dierdre falls for a glasses nerd!
The movie reportedly clocks in at 88 minutes, but seems to go on much longer! There’s a stand-up comedy routine that rivals the one in Hack-O-Lantern for cringeability! Rose Marie, last seen sweeping up after the action in Witchboard, turns up as a tough old bat in the tradition of the one played by Anne Ramsey in The Goonies! And a friendly cop regularly motors up to drink coffee or arrest people! So you can see there’s no shortage of character or incident, ha ha! The characters are mostly agreeable enough, but there’s little of substance going on and none of it is funny! I give Lunch Wagon one motor oil in the overalls!
Posted by Burl at 08:40