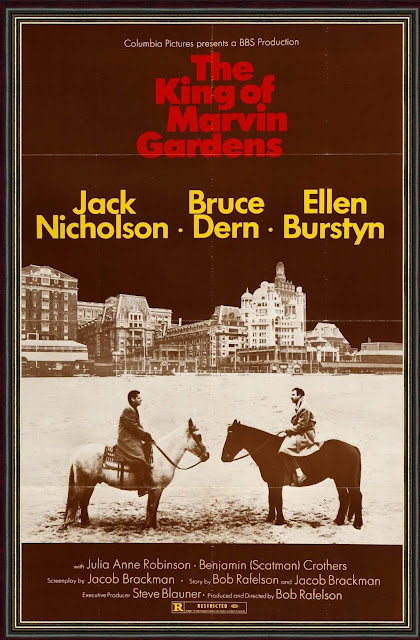 Ha ha and welcome, friends, to another movie review! Today I’m talking about a picture I saw many years ago and remembered in my mind as being pretty great! Well, I watched it again recently, and let me tell you, it holds up very well! The movie is one of those 1970s classics, and the title - which, let’s be honest, isn’t a great title - is The King of Marvin Gardens!
Jack Nicholson, renowned for his antics in The Witches of Eastwick, was early in his stardom at this point, and was still well able to play restrained characters who never need to raise their voices or speak in little bullets of biting, cynical pith! Here he’s playing a quiet Philadelphio called David Staebler, the host of what must be the most depressing radio program of all time! Called down to Atlantic City by his jailbird brother Jason, essayed as an all-time slimeball by Bruce Dern from Smile and Once Upon a Time… in Hollywood, David is drawn into a world of petty crimes and con jobs!
He’s also pulled into the world of his brother’s two ladyfriends, a stepmother-stepdaughter duo played by Ellen Burstyn, whom we know from Getting Gotti and The Exorcist, and Julia Anne Robinson, who appeared in the film version of A Fan’s Notes, but died in a fire in her apartment when she was only 24! That’s sad, because she was pretty and, on the evidence seen here, a talented actor!
David is at first rather freaked out by this weird world of big dreams and petty swindles, but he soon becomes as intoxicated by it as everyone else, and before long the quartet are prowling the beaches and boardwalks and Ventnor Avenues and everywhere else you find on a Monopoly board, taking jitney rides and, for whatever reason, auditioning auctioneers! All of this is photographed with picturesque verve by Laszlo Kovacs, a man of great ability, and directed in a laid-back, observational style by Bob Rafelson, who later gave us the less intriguing Black Widow!
Scatman Crothers, known for his appearances in Truck Turner and with his buddy Nicholson in The Shining, has a great bit as Lewis, the local godfather upon whose name Jason trades! Ha ha, of course Lewis is less than pleased about this! But one thing I love is that, in this picture about gangsters in Atlantic City, a gun is still a really big deal, as it should be! They’re treated as truly dangerous objects, and there’s even a scene in which two tough hoods come to kidnap Jason, but as soon as a gun comes out, they run away! Ha ha, there’s a feeling of real consequence surrounding the objects in this picture, and that consequence, of course, comes to pass in the third act!
Other familiar faces pass through in the meantime, like John P. Ryan, known to all from Fatal Beauty and Avenging Force, not to mention Runaway Train, The Right Stuff and the It’s Alive pictures, who here plays a pharumphing concierge! Josh Mostel from The Money Pit is in the mix too, playing the producer of Nicholson’s hilariously mopey radio show! Everyone involved seems to be on the same wavelength, and they work together to make the movie funny and bizarre and not merely tragic! It’s also got a great off-season atmosphere, and I of course am a big fan of the off-season genre! I’d put pictures like Tough Guys Don’t Dance and The Slayer into this basket too, ha ha!
It’s a generally marvelous little picture, with the same sense of creeping desperation you find in other great little lesser-known 70s pictures, say Fat City or Scarecrow! I was very glad to find a DVD of it, as I’d seen it back in the VHS era and have been thinking about it ever since! I give The King of Marvin Gardens three and a half lobster bibs!
Posted by Burl at 01:25