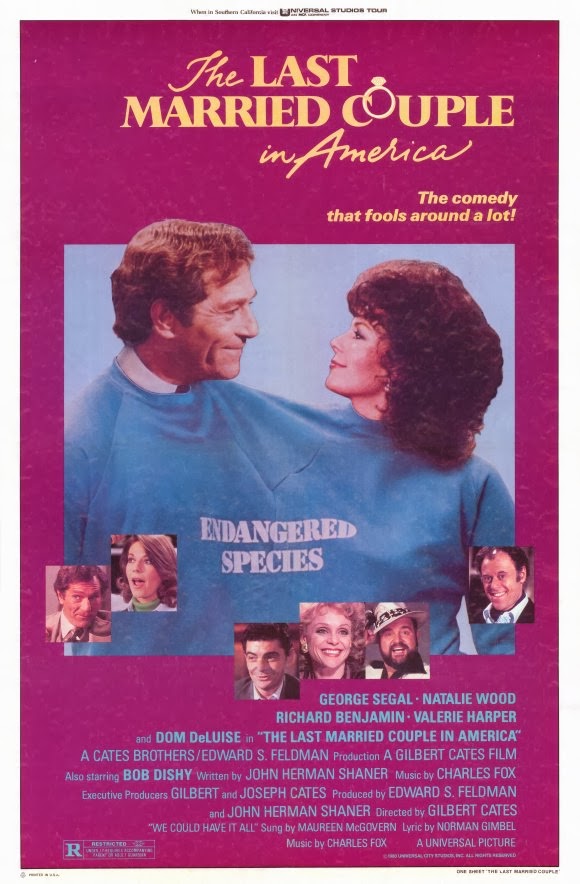 Ha ha, Burl here, with exciting news to report! I may have stumbled across the fount of my small, sporadic interest in middlebrow adult comedy-dramas from the late 1970s and early 80s! You know, It’s My Turn, Fastbreak and the like! Anyway, this one’s a doozy, and I remember seeing it on TV when I was young, and being strangely intrigued!
Partially this was simply because I was fascinated by Richard Benjamin, who looked, talked and acted just like a friend of my parents’, a guy named Bill! Nice fellow! Anyway, yes, Richard Benjamin, who of course directed The Money Pit and many others, is in this picture, and is easily the best thing in it or at least the funniest!
George Segal, well known from Stick, and Natalie Wood of Brainstorm take on the roles of Jeff and Mari, a married couple who play an extremely informal brand of foot-ball with their friends every week! Well, the foot-ball pals get whittled down as the other couples all split up or separate in some fashion, sometimes recoupling in unusual ways! Ha ha, and when Jeff and Mari start feeling like the last married couple in all of America, they start acting weird, like when George Segal has a one night stand with Rhoda!
In the meanwhile Richard Benjamin’s character Marv is getting a divorce, and poor Marv is unraveling his way through the c.1980 singles scene! Ha ha, the dialogue isn’t all that funny, but Benjamin's delivery does remarkable wonders! Less funny but not un-entertaining is Dom DeLuise, who plays a part-time plumber with, ha ha, other interests! And there are others, like Allan Arbus, known from The Christian Licorice Store, who is also something of an unlikely swinger, and Bob “The Big Bus” Dishy, and Pricilla Barnes from Lords of the Deep! Ha ha!
Ha ha, in spite of the script having been written by John Shaner, who played one of the layabout beatniks in the original A Bucket of Blood, it’s not very good! The picture starts off with sitcom-y, but still recognizably human, behavior, and then slides into a whole mess o’ unlikelihoods an’ proposterousnesses! The early part of the picture, where the couples are breaking up one-by-one style in what seems some manner of marital slasher scenario, is the most interesting and relevant part; but by the time Dom DeLuise has invaded the couple’s house to host a crazy swinger birthday party (ha ha, with the kids in the next room the whole time, it turns out!), nothing means nothing anymore, despite the compelling presence of a giant man-sized prostitute in a weird backless outfit!
I remember being very interested in Jeff and Mari’s plant-filled, open-concept SoCal house, and it was as good as ever, even with sculptress Mari’s blobby work-in-progress sitting in the middle of it! (Ha ha, she’s about as talented an artist as Walter Paisley!) And even if the picture as a whole has almost no relation to reality, it’s a pretty good time capsule of the era! But otherwise it’s a pretty bland concoction, although you can tell it tries to be, and believes itself to be, bold and daring! It seems more like one of those Rock-and-Doris pictures with all the charm hoovered out and smarmy, sniggering jokes stuffed in its place! But if the form interests you as much as it does me, you should go ahead and give it a watch; just be warned that it’s a pretty poor ungarian! I give The Last Married Couple in America one and a half fur coats with nothing on underneath!
Posted by Burl at 15:59