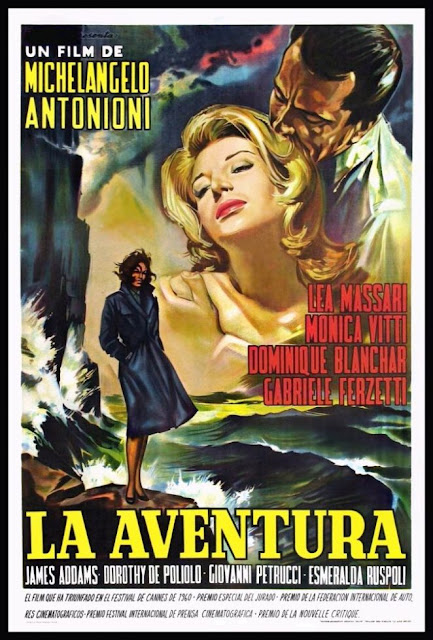 Ciao bella, it’s Burl, here to review on of the grand Italian pictures of the 20th century! Ha ha, this one is L’Avventura, by Michelangelo Antonioni, a director I’m very fond of! Ha ha, I still remember his Oscar speech, when he got one of those special achievement statuettes at the age of about a million and two, and he shuffled up to the microphone and leaned in, and the crowd hushed reverently to hear what the Maestro would say, and, in a gravelly old-man voice that had somehow lost none of its fortissimo, he uttered but a single word: “Grazie!”
Ha ha, it was then that I understood: this man spoke through his films! And he made some good ones, ha ha - I’m particularly fond of Red Desert, and like everybody I’m a fan of Blow-Up! And I even like Zabriskie Point! I went to see that picture he made with Wim Wenders, Beyond the Clouds, but aside from it being the very definition of an Old Man Movie, with plenty of ladies in the nude, I don’t recall much about it, except that it was not so great!
L’Avventura, however, is great, ha ha! As it opens we find ourselves among the Italian leisure class, with a bunch of stylish folk planning a boating excursion around the islands off of Sicily! There’s Anna, who seems a sad and troubled and dissatisfied young woman, and no wonder, because her boyfriend is Sandro, who seems strangely middle-aged and who reveals himself through the picture as a perfidious, inconstant, manipulative jerk! Ha ha, I really hated him! But he’s played very well by Gabriele Ferzetti from Lucio Fulci’s The Psychic!
The main character in all this is Claudia, played by the gorgeous Monica Vitti, the ScarJo of her day, ha ha! Claudia is Anna’s friend, but after Anna mysteriously disappears, and after a scene in which she and Sandro experience coincident revelations that, while they each loved Anna in their way, she, being incapable of love, never returned the feeling, romance begins to brew! Slowly, as the search for Anna continues and then peters out, Claudia and Sandro embark on the adventure, or fling, of the title!
Along the way there are other characters to concern ourselves with, of course, like Anna’s father, and her other friends, who don’t necessarily seem concerned about her disappearance, and the old goatherder! Ha ha, I assume he’s a goatherder anyway, because there always seems to be one on these islands! (And most of the first half of the picture is set on the island, and we briefly get reminded of The Lighthouse, a much more recent picture!) We also have the young painter, with his emo cut and pouty lips and hilariously bad breast paintings! And Gloria Perkins, ha ha - who is she, but an object stared at and lusted after by an entire town of creepy men? And this incident repeats itself with Claudia now the object of the creepy men’s gaze - I’ve never seen the discomfort women feel under the male gaze better or more repellently represented in a picture!
The ending of this picture is, not to put too fine a point on it, quite horrific! I won’t give the details, but if you feel anything like I do about Sandro, and if you’re pulling for Claudia because she’s beautiful, or because she grew up in modest circumstances and so really isn’t one of these indolent rich, or just because you like her, then you’ll feel as despondent as I did, ha ha! But you’ll probably also recognize the plain human truths this movie has to offer, and feel the power of the images and the sheer craft that went into its making! I could go on, but I won’t - I’ll just give L’ Avventura four spilled ink bottles!
Posted by Burl at 11:00