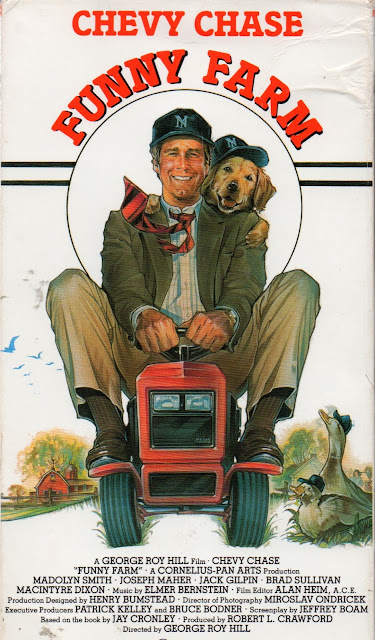 Buck-buck-buck, it’s Burl, here to review a movie about a farmer! Ha ha, well, sort of! And it’s just as sort of a movie about a farm! Actually the farming is all in the title and in the characters’ names – otherwise farming is an utter non issue in this picture! The movie is called Funny Farm, and it’s yet another one of the 80s comedies I’ve decided I should finally get around to watching! Ha ha, most of them are pretty bad, so this very loose project is as much a mystery to me as to anyone!
All I can do when I pop one of these items in is pray it’s not as bad as Protocol! But I’ve always been curious about Funny Farm, because although it has every appearance of being a particularly lame Chevy “Fletch” Chase picture, it was directed by George Roy Hill, which I always assumed had to count for something! Hill made at least a couple of pictures I really like, and here you’ll assume I’m going to say Butch Cassidy and the Sundance Kid and The Sting! Ha ha, those are fine pictures, but for my money his classics are Slaughterhouse-Five and Slap Shot!
Okay then, what about Funny Farm? Well, heart-sinkingly enough it started out just like another 80s comedy, The Money Pit! Sportswriter Andy Farmer and his wife Elizabeth, played by Chase and Madolyn “All Of Me” Smith, remove themselves from New York to a pastoral area near the town of Redbud, somewhere in Vermont! Thankfully the house doesn’t start falling down around them, but indeed strange and worrisome things do begin to occur! Some of them involve Chaseian slapstick, but many others do not – they have more to do with the weirdnesses and venality exhibited by the townsfolk, and the emotional, physical and ethical toll this takes on poor Andy!
Some of it is kind of funny and some of it is dire! Andy’s book gets written, but it turns out to be terrible! (I thought it would be a movie about how he can’t write his book, but along comes a helpful montage near the end that enables him to create a literary masterpiece! Glad I was to find this was not the case!) Meanwhile Elizabeth writes a book of her own and manages to sell it in short order! Ha ha! This leads to a second-act turn which leads to the final bit of the picture, wherein the Farmers instigate divorce proceedings and pay off the townsfolk to help them sell their house!
Now this sounds like an interesting development, doesn’t it, ha ha! But it seems to come out of almost nowhere, as the townsfolk haven’t actually been that weird, or at least haven’t been so weird as to put off prospective buyers! (The Farmers bought the place, after all, didn’t they!) It feels as though a lot was cut out, like there’s an Our Town’s worth of material showing the Redbuddians acting weird and the feud between them and the Farmers reaching crisis proportions! But this has to be imagined, as we don’t see it in the picture!
But what we do see is better than I’d thought it would be, probably because there was a real director to keep Chevy in line, and to stand up to whatever wackiness or sentimentality the studio might have demanded! And the last act turned out to have a Yuletide setting, so it was unexpectedly appropriate for the season, ha ha! So in the end it’s among neither the best of the 80s comedies I’ve been drawing from my VHS collection, nor the worst! It’s pleasant, forgettable 80s entertainment! I give Funny Farm two skeleton arms in the trash!
Posted by Burl at 00:56