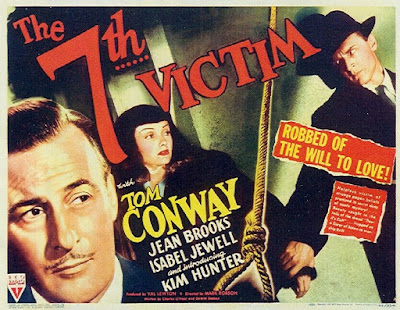 Ha ha and hucklebucks, it’s Burl, here to review one of the greatest of the Val Lewton pictures, and, as you may know, all of them are pretty great, so to be among the greatest of them is really something! I’ll tell you, my favourite is I Walked With a Zombie, but this one, The 7th Victim, is right up there!
It’s a terrifically literate picture, and marvelous with atmosphere! Ha ha, it tells the story of young Mary, an orphan raised by her older sister Jacqueline, who is informed by the ladies of her boarding school that Jacqueline has turned up missing! Well, there’s only one thing for it so far as Mary is concerned: travel to New York’s storied Greenwich Village and solve the mystery herself! Little does she realize that she’ll be entering a world of uncommon desperation and existential sorrow!
She also encounters some of the most banal evil ever put on film, and I don’t mean that as a criticism of the film! Ha ha, on the contrary, the devil cult with which it turns out Jacqueline was involved in is one of the most fascinating aspects of the picture! Once Mary’s sister has made herself an apostate so far as the cult is concerned, according to their code she must die! But another codicil to their code is a strict policy of nonviolence, ha ha, so they must figure out some way to reconcile these opposing dictates!
Within the picture’s tight 71 minute running time, Mary meets a wide variety of folks, including a doleful ex-poet called Jason, played by posthumous Silver Star recipient Erford Gage, who died on Iwo Jima; Jacqueline’s secret husband Gregory Ward, played by Hugh Beaumont, who would become famous as a different Ward later on, ha ha, which is to say Ward Cleaver from Leave it to Beaver; stuffy Mrs. Redi, who takes over Jacqueline’s cosmetics company; and the ingratiating, fearful private eye Irving August, played perfectly by Lou Lubin!
Mary herself is played by Kim Hunter from The Kindred in her film debut, and she does very well as the seeming naïf who occasionally demonstrates at once a strength of resolve and a weakness of character, a combination that spells doom for poor Irving August in one superbly staged scene! The picture in fact has several modestly well-mounted setpieces, including a shower scene involving Mrs. Redi which Hitchcock may have seen some time before making Psycho, ha ha! There’s also a quiet stunner of an ending involving a consumptive prostitute out for one last night on the town, and the thump of a falling chair!
This was the film debut not just of Ms. Hunter, but also of Mark Robson, previously the editor of many RKO films, including the first few Lewton productions, and later the director of such big pictures as Von Ryan’s Express and Earthquake! It was an auspicious debut, I must say, because this picture is a real gem: quiet, thoughtful, scary, altogether different from the usual run of low-budget horror! Of course all the Lewton pictures were that, but this one stands out even from them, and to me that makes it a very special movie, and one I encourage you to watch! Ha ha, I give The 7th Victim four manuscripts of mediocre poetry!
Posted by Burl at 14:37