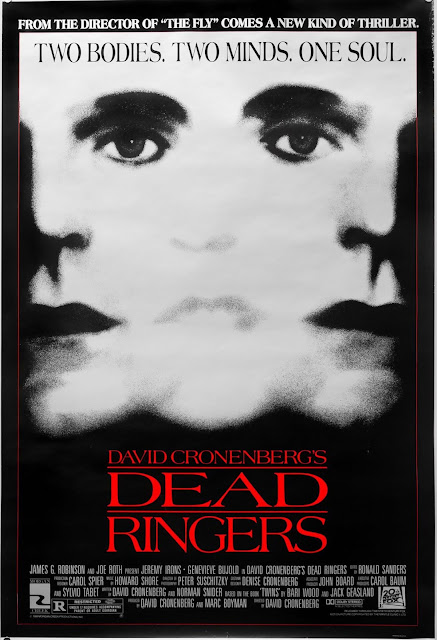 Ha ha, I’m seein’ double: four Jeremy Ironses! Yes, it’s Burl, stealing a joke for you to open a review of a picture made by one of my favourite directors, David Cronenberg, who also made Fast Company, of course, and Stereo too! The movie I’m talking about today is Dead Ringers, which might have been better off called Gemini, as I believe was the original plan! Then they were going to call it Twins, but Ivan Reitman put in the call and took that title for himself! They settled for borrowing the title of an old Bette Davis Batty-Old-Dame picture and adding an S to the end! Ha ha!
Now, I used to be a regular attendee of the Toronto Film Festival! Ha ha, every year I would fly in, take a hotel room with some equally movie-mad pals, and see as many movies as we could! Back in those days the grand premieres were held in Ryerson Hall, and, quite by chance, my friends and I discovered a side door and a passageway that led into the basement under the theater, from which we could emerge and take seats without ever buying a ticket! Ha ha, it was great, and very sneaky! And the first movie we did this for was Dead Ringers!
Yes, le tout Toronto was there, cheering on the hometown boy in all their furs and finery! Unfortunately there was a technical issue in which the sound went off for approximately five minutes! Ha ha, I really felt for Cronenberg during this time - it’s got to be no fun when the grand premiere of your newest picture goes wrong! But the problem was soon corrected, and no great harm was done!
I certainly enjoyed the picture, though it was the start of a new, sui generis period for a director whose horror and science fiction works I had thoroughly enjoyed for years! Dead Ringers tells the story of the Mantle brothers, twin gynecologists both played by Jeremy Irons from Die Hard With A Vengeance! Ha ha, the trick effects used to double up on Irons are pretty well flawless, and the unfussy, dare I say clinical style that comes so naturally to Cronenberg greatly helps the illusion! Ha ha!
The brothers regularly impersonate one another, with Elliot the more outgoing and playboy-ish, and Beverly the shy-boy! But when they get mixed up with a famous actress played by the great Geneviève Bujold, well known from Tightrope and The Moderns, their carefully crafted, deliberately symbiotic lives get churned up like a roughly-poured pousse-café!
Of course things go badly for the Mantle boys, helped along as they are by the excellent performances of the actor playing them, and by an exceptionally effective Howard Shore score, and by truly fine direction from Cronenberg! People, including myself, tend to remember this as a thoroughgoing drama-movie, and a particularly squirmy one given the main characters’ profession; but what I noticed this time around was how funny the picture is! Ha ha, Cronenberg has even said that all of his movies are fundamentally comedies, and I see now that this is true!
It’s very clever, devious comedy, and there’s a lot to think about once the movie comes to a close! “She’s an actress,” Elliot tells Beverly in discussing the Bujold character. “You never know who she really is!” And the great irony with which this complaint is buttered is foundational to this fine picture! Oh sure, it’s got flaws - like, who is that redheaded lady anyway? - but it still impresses me on multiple levels, and I give Dead Ringers three and a half surprise cameos from non-actor Stephen Lack!
Posted by Burl at 23:19

Email ThisBlogThis!Share to TwitterShare to FacebookShare to Pinterest
Labels: 1980s, Canada, Cronenberg, drama, saw it on the big screen