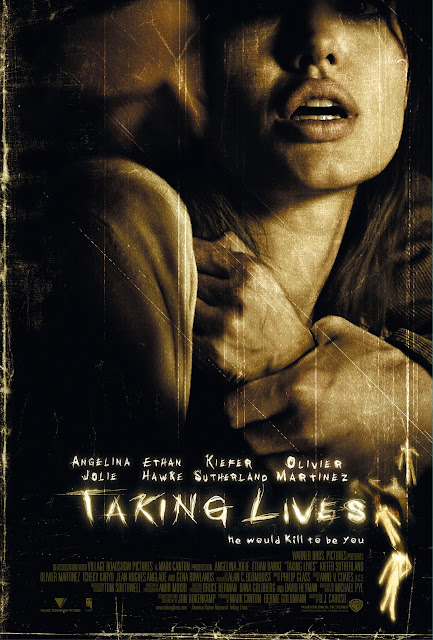 Ha ha and hollyhocks, it’s Burl reviewing at you again! Now, what might you get if you took Silence of the Lambs and mixed it up with Se7en? Well, ha ha, you’d get any one of the dozens upon dozens of rip-off serial killer pictures that came out in the 1990s and 2000s! Among those hangdogs is Taking Lives, one of the slicker and more big-budget of the imitators, but in its way as weak a simulacrum as something like, oh, Red Team!
Angelina Jolie, of the bee-stung lips, plays the usual sort of FBI agent who has some preternatural insight into the minds of serial killers, like Will Graham from Manhunter, and while it’s a talent she might rather not have, she’ll grimly and doggedly use while she’s got it! She arrives in Montreal (which is played in the movie interchangeably by both Montreal and Quebec City, ha ha) to help the local constabulary track down a serial killer who was played as a young lad by Paul Dano, but by now might look like just about anybody!
Why, he might look like Ethan Hawke, the actor famed from Explorers, who here plays a mild-mannered art gallerist who happens to have interrupted the killer in the midst of his latest murder! Or he may resemble Kiefer Sutherland, whom we know from Stand By Me and The Lost Boys, and who certainly acts the part of a killer! Or he may look like some random nobody, or even one of the cops, which is the twist I was expecting! Only Gena Rowlands from Light of Day and The Brink’s Job, knows for sure, because the killer is her son, and though he’s long been thought dead, she recently spotted him on a boat!
So I guess the whodunit angle is where the picture tries to distinguish itself from the movies it’s modeled on, but the dearth of suspects renders this distinction not much of one at all! Ha ha! The Quebec locations, and a brand of Canadian-ness with the quality of having been arrived at by way of the children’s game of Telephone (“I should have stayed in Winnipeg!” Hawke’s character grouses at one point), give it a tiny sliver of uniqueness though! Still, it’s strange that all the Quebec cops are played by French actors: Tchéky Karyo from Kiss of the Dragon, avuncular and wise; Olivier Martinez from IP5: The Island of Pachyderms, resentful and angry; Jean-Hugues Anglade from Betty Blue, neutral and doomed!
It’s pretty cookie-cutter stuff, and, ha ha, I can't see it being anyone's favourite movie! There’s a pretty fair boo-scare in there, and some gross Special Makeup Effects, but these things are surrounded by an awful lot of silliness! Ha ha, I give Taking Lives one and a half horrible straw mattresses!
Posted by Burl at 16:12