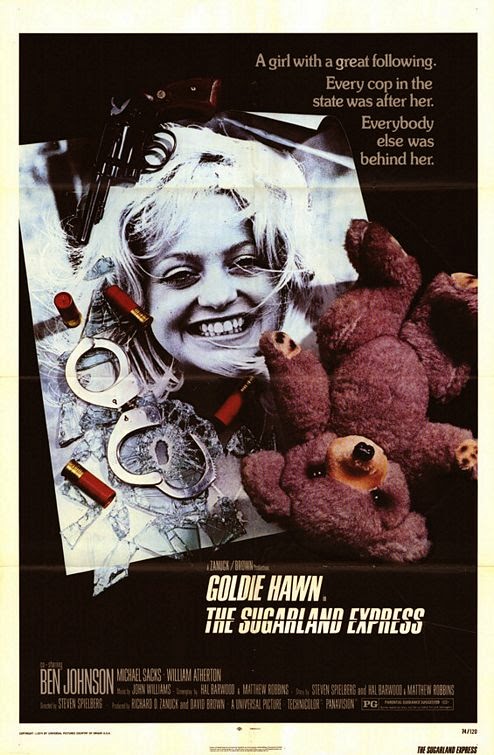 Yee-ha-ha, it’s Burl, here to review the picture Steven Spielberg made just before he tackled Jaws! Yes, it’s The Sugarland Express, and it’s a movie I’d never seen before, ha ha!
I think the reason I’d always avoided it was that it promised a not inconsiderable number of Goldie Hawn moments on screen, and if you’ve ever read my review of Protocol, you know that ol’ Burl can surfeit of Goldie Hawn moments pretty easily! Not that I really dislike her or anything; it’s just that my Hawn reservoir, being perennially untapped, overflows at the slightest refill!
But when the picture came on the old-movie network, I thought it was finally time to have a look! Ha ha, it was apparently Goldie’s first dramatic role, and though there are many of her goofette traits on display, she also gets to cry and rage and play sly and other things Laugh-In just didn’t allow for! She’s not bad, overall, though the character comes off as being really not so very bright at all!
She plays a young lady who’s just come out of the hoosegow, and her husband, a fellow named Clovis, happens also to be in the pokey, though he’s got a few months left to go! (Clovis is played by William “Ghostbusters” Atherton, back in the day before he was known mainly as a guy who played jerks!) But the couple’s little baby has been handed off to a foster family, and to prevent the lad from being lost to them forever, Goldie’s plan is to break Clovis out of the pokey and for them to somehow then go get the wee lad! This leads to a police chase and the kidnapping of a young officer, and then an ever-escalating mega chase led by courtly Ben “Terror Train” Johnson!
The young officer is played by Michael Sacks, who was also the lead in the movie version of Slaughterhouse-Five! It turns out he was only ever in a grand total of twelve movies and TV shows, the last of them in the mid-80s! But he was a good actor with a very appealing presence, so that makes me wonder just what happened to the poor guy!
In any case, the movie is very nicely done, though not the most thrilling and original thing ever made! It looks good, thanks to Vilmos “The Witches of Eastwick” Zsigmond, and it has some funny bits and plenty of nice performances! Ben Johnson is a particular delight – I’m always cheered up when he comes on screen, ha ha! I recall that, after seeing Jaws, some friend of Pauline Kael’s told her that Spielberg was the first director to come without a proscenium arch hovering over his head, and while that’s obviously not true, you can certainly see what he meant when you watch his early work!
It’s a nice little picture even if the John Williams score too often sounds like a Christmas carol (I forget exactly which one, ha ha), and so I’m going to give The Sugarland Express two and a half Louisiana lunkheads!
Posted by Burl at 22:39