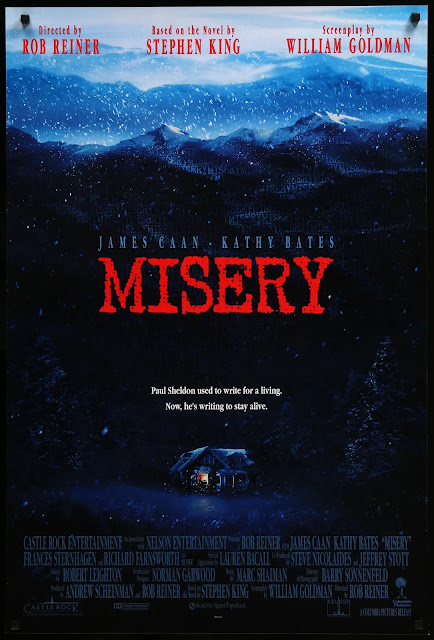 Good day you dirty birdies, it’s Burl, here to review a movie about a demented fan! No, though it does feature Lauren Bacall from The Big Sleep, it’s not The Fan! In fact it’s Misery, a movie that, like Stand By Me, involves Rob Reiner taking a Stephen King story and doing some of his very best work with it!
James Caan from Submarine X-1 and Elf plays a writer called Paul, whose most famous works are a series of antebellum soap operas featuring a Scarlett O’Hara character called Misery! But he’s the usual Stephen King type of writer, the kind with literary ambitions buried beneath his commercial success, which he has now exercised with a new, as yet untitled, book about street waifs! He types the last lines of his book in his Colorado winter resort cabin, enjoys a smoke and a glass of champagne, and sets off in his Mustang for New York City!
But this foolish writer has not checked the weather, and he evidently is not accustomed to winter driving, so his ‘stang flies off the road! He’s rescued by Kathy Bates, well known for playing Gertrude Stein in Midnight in Paris, a demented farm lady who loves the Misery books above all else, and who sets Paul’s shattered legs and feeds him soup, and who has a head full of cracklin' bran! When she discovers first that Paul has written a profanity-laced, non-Misery book about street waifs, and then that his latest Misery book kills her favourite character off, she’s not too pleased, yo! Ha ha!
It’s not quite the two-hander it sounds as though it might be from that synopsis: Richard Farnsworth from Into the Night plays the local lawman Buster, who slowly pieces together the clues, and… well, ha ha, have you seen The Shining? Yes, I’m sad to report he’s the Dick Hallorann of the piece! Frances Sternhagen from Outland plays his salty wife, and there’s even a little cameo from J.T. Walsh, known for his appearance in Eddie Macon’s Run, as a hilariously insensitive state trooper! But it’s the Caan and Bates show for the most part, and both of them are excellent!
It’s a marvelously crafted picture, which gets pretty grisly in parts, but doesn’t go overboard the way it probably would if someone made it now! It’s a little hokey the way Paul uses his tools as a writer - stories, writing paper, a typewriter - as his weapons against his buggy warder, but this aspect comes directly from the King book! The supporting cast, particularly Farnsworth, Sternhagen and Bacall, is made up of the sort of faces you just plain feel glad to see when they come on screen, and Reiner’s direction is restrained and strong, and William Goldman’s screenplay simplifies and externalizes only what needs to be simplified or externalized! It’s a solid picture, which I remember enjoying in the theater and which holds up well now! I give Misery three beloved pet pigs!
Posted by Burl at 16:15

Email ThisBlogThis!Share to TwitterShare to FacebookShare to Pinterest
Labels: 1990s, drama, horror, house, saw it on a date, saw it on the big screen, Stephen King, suspense, winter, writer