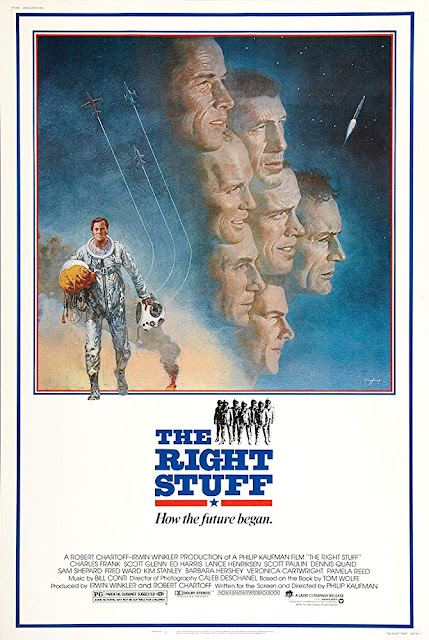 Ad astra, friends, it’s Burl! No, I’m not reviewing the recent Brad Pitt movie by that title, not yet anyway, but instead a picture suffused with the spirit of this inspiring phrase! Ha ha, yes, I’m talking about The Right Stuff!
This movie was a pretty big deal back in the early 1980s, as I recall, though not in terms of box office! I guess it’s a pretty long picture, and people were worried they might have to go to the bathroom in their spacesuits, ha ha! I wish I’d seen it in the theatre, you bet, and why my family didn't go is a mystery to me, because we usually took in all the epics! It’s a beautifully shot picture - take a bow, Caleb Deschanel! - and would have played magnificently on the big screen, I am sure!
Of course it’s the story of the beginnings of the American space program, before they even had a thing called NASA, and plays a little like a prequel to Apollo 13! It starts with Chuck Yeager, played by Sam Shepard from The Assassination of Jesse James by the Coward Robert Ford, and his ladywife Glennis, personified by Barbara Hershey from Hoosiers! They ride horses, banter a bit, and then old Chuck goes and breaks the sound barrier! After that we get into the recruitment and training of the Mercury 7 astronauts, and as the space flights start, we get all sorts of ups and downs both technical and personal!
The cast, of course, is extraordinary! The Mercury 7 include Scott Glenn from The Hunt for Red October as Alan Shepherd; Ed Harris, well known from Creepshow, as John Glenn, no doubt drawing on this experience when he played control room chief Gene Kranz in Apollo 13; Dennis Quaid, playing Gordon Cooper the same way he later played Tuck Pendleton in Innerspace; Fred Ward from UFOria playing Gus Grissom with great wounded dignity; Scott Paulin from Forbidden World as Deke Slayton; Charles Frank from Russkies as Scott Carpenter; and Lance Henriksen from Aliens, The Visitor, The Horror Show, and many, many others, as Wally Schirra, who later sold ointments on TV as I recall!
The wives are just as strong a group: Veronica Cartwright from Nightmares; Pamela Reed from Junior; Kathy Baker from Edward Scissorhands; and Mary Jo Deschanel from 2010, in which she played a different astronaut’s wife! Plus we get Donald Moffat from The Thing as a cranky LBJ; a pair of comedy-relief recruiters seeking out the spacemen for the program, who are played with an Artoo and Threepio dynamic by Harry Shearer of Godzilla and Jeff Goldblum of Into the Night; a proto-NASA official played by John P. Ryan of Avenging Force; another official type played by David Clennon of Matinee; the always-welcome Levon Helm from Staying Together, playing mechanic-designer-gum supplier Jack Ridley; and the great Royal Dano, playing another in his long line of cadaverously allegorical memento moris!
The picture is in many ways a remarkable thing: at once mythmaking and myth-deflating; a resolutely personal telling of a defiantly epic story; traditional and grounded while reveling in outrageous eccentricities and gross-out gaggery! Ha ha! It celebrates individual achievement while insisting the same is not possible without communal effort, wastes no time on flag-waving, and its stand-up-and-cheer moments come as much from small moments, like John Glenn backing up his shy, stammering wife when she doesn’t want to meet Johnson, as from aeronautical triumphs!
Ha ha, I wonder if there’s a Russian version of this story! If there is, I’d like to see it! In the meantime, this excellent telling of the tale from the American side will have to do! I give The Right Stuff three and a half nurses peeking through portholes!
Posted by Burl at 10:08