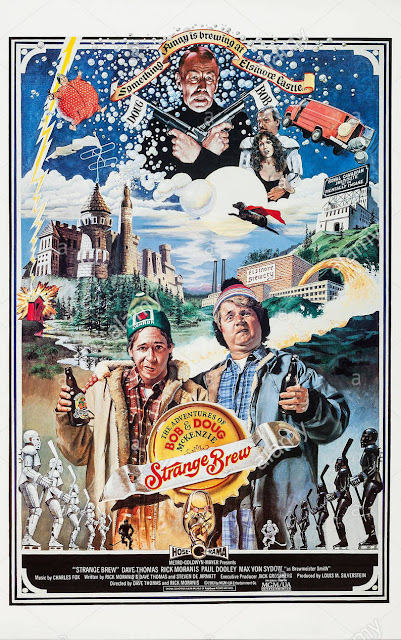 Ha ha hosers, it’s Burl, here with beer and back bacon and ready to take off to the great white north with a review of the Mackenzie Brothers’ big-screen adventure Strange Brew! Ha ha, for those who don’t know, these two canuckleheads, Bob and Doug McKenzie, were mainstays on the great show SCTV, which I watched religiously in my youth! Apparently the time slot in Canada was a couple of minutes longer than it was in the US, so to fill those extra two minutes they made little segments called Great White North, in which Bob and Doug, played by Rick Moranis from Ghostbusters and Dave Thomas from Stripes, would sit on a couch, swill beer and ruminate drunkenly on some topic or another!
Ha ha, I loved those segments! But somehow, even if they were just designed for Canadians, the magic of Bob & Doug made its way south of the border, and they became popular enough for MGM to greenlight a movie about these loveable, bickering oafs! They directed it themselves, too, ha ha, and got the fog filter-loving cinematographer Steve Poster, who’d done Blood Beach and Dead & Buried, to shoot it! And they set it explicitly in Toronto, with more shots of the CN tower than there are in Highpoint, ha ha!
Craziest of all, for this picture they decided to adapt Hamlet! It’s a pretty loose adaptation, to be sure, but they play Rosencrantz and Guildenstern types who get involved in family intrigue at Elsinore Brewery, where the paterfamilias has recently been killed under mysterious circumstances, and the prodigal daughter, Pam, returns to sort out affairs! But her perfidious uncle Claude has married her mother Gertrude, and is plotting with the nefarious Brewmeister Smith to take control of the brewery and do something involving insane hockey players, tainted beer, and the rapidly-approaching Oktoberfest!
Ha ha, modeling the story roughly on Hamlet is really the only thing that gives the picture a story at all, because the narrative is otherwise pretty sketchy and improvisational! It helps that the cast is a strange and intoxicating mix of foreign ringers - Max von Sydow whom we know from The Magician and Dreamscape, is the Brewmeister; Paul Dooley, well known from Last Rites, plays Claude - and familiar Canadian faces, like Lynne Griffin from Curtains and Black Christmas, and of course Mr. Patman, who essays the role of Pam, and Angus MacInnes, from Bells and Spasms, who is the Ophelia figure, Jean LaRose! Plus we get the hilarious National Lampoon writer Brian McConnachie as Brewmeister Smith’s passive assistant Ted, and who has a small part as a lawyer? That’s right, none other than Thick Wilson from Sex With the Stars! Ha ha!
Now I’ll say this: I love this movie and find it very funny, but I have every sympathy for anyone who might find it puerile, dumb, not funny, poorly directed, and narratively nonsensical! It’s subjectively hilarious, strictly, but if you like Bob & Doug and want to see a movie about them, this will fit the bill nicely! It’s necessary to have some beers to drink while watching it, I firmly believe, or perhaps some gingered ale if you happen to be a teetotaler! You’ll enjoy the dogbowl full of beer, the kung-fu lawyer with the delightfully ingratiating smile, the portrait of Pierre Trudeau, the van jump into Lake Ontario, the unexpected vocal cameo from Mel Blanc, and much more! I give Strange Brew two and a half Canadian Institutes for the Mentally Insane!
Posted by Burl at 00:47