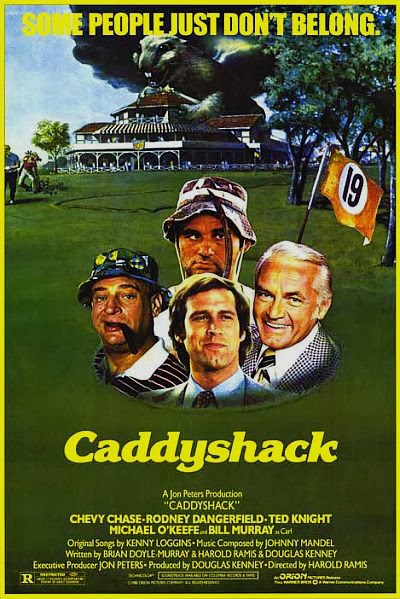 Fore! Ha ha, no, it’s just Burl here with a golf movie for you! Yes, quite naturally it’s Caddyshack – no Tin Cup here, ha ha! (Although if I’m going to review all the movies, I guess I’ll have to see that one eventually!) You might be saying “Ha ha, Burl, is this another one of the 80s comedies you’ve never seen before?” I say no, it’s not – in fact I’ve seen Caddyshack many times before!
But I recently acquired a copy on VHS, so I thought I’d give it another look! It’s a pretty good test tape to use when you want to show off your system, or just give it a workout! Ha ha! And of course it has those marvelous gopher trick effects, where he dances to that terrific Kenny Loggins song! The last four words of that sentence, by the way, are reserved exclusively for ‘Theme From Caddyshack (I’m Alright)!”
The picture’s about golf, and features four separate comedy-men doing less a quartet of characters sharing a coherent story than a bunch of routines at an ad-hoc variety show with a vaguely sporting background! Rodney Dangerfield, Chevy “Funny Farm” Chase, Ted Knight and Bill “Ghostbusters” Murray mostly orbit around one another, doing their thing (nouveau-riche oaf; playboy smoothy; uptight snob and drooling halfwit, respectively) and only occasionally interacting with one another in scenes which mostly seem made up and improved on the spot just to provide that interaction!
So it’s not a plot-heavy picture, ha ha! What plot there is comes from the Meatballs school of dramaturgy: a younger lad required the guidance of the older comedy gents around him! This time the kid is older and not as drippy, and it’s Chase who offers him council, not Murray! In the meantime there’s a clash of values between Dangerfield, who’s so gauche he’s droit, and Knight, who does the uptight patrician-gone-sour thing better than just about anyone!
Chevy Chase is meant to be a rich man and a superior golf player, but there’s not much more to him! Murray tells a great, extemporized story about the Dalai Lama and otherwise chases the animatronic gopher! There’s an Irish waitress and (I think?) two individual rich blondes! Or they might have been the same person – I’m just not sure! Ha ha!
It’s ramshackle and the seams sure do show, but it’s a funny picture with a good heart, and there’s a reason it’s lasted as a favourite for as long as it has! I’ve never seen the sequel, but I understand it to be dire, even though it was directed by Allan “Get Crazy” Arkush! Caddyshack is a breezy and untroubled concoction, and I give it three free bowls of soup!
Posted by Burl at 23:50