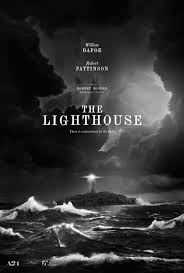 Avast ye dogs and arr-bee-darr, it’s Burl! Ha ha, no, I haven’t turned into an old salt with a pegleg and a parrot on his shoulder and a corncob pipe clenched between my teeth and a sou’wester drenched in sea spray! Ha ha, no, it just feels like I have, for I recently went to see the new motion picture The Lighthouse!
Yes, it’s from the director of The Witch, which I enjoyed, and fits solidly into the niche this fellow is carving out for himself: historical horror-dramas featuring characters far removed from civilization and any hope of rescue! In the case of The Lighthouse, our characters are a scurvy old lighthouse-keeping sea dog called Tom Wick, and his younger helper Ephraim Winslow! Tom is played by Willem Dafoe, that fine actor known from Streets of Fire, and Ephraim by Robert Pattinson, who did yeoman’s work in Good Times!
They’re working, and soon enough are trapped, on a craggy little rock in the Atlantic, manning a lighthouse and foghorn to warn off the ships that never seem to be passing by! At least, ha ha, we never see them! Tension between the two men breaks out almost immediately, with bouts of shouting and acrimony only occasionally interrupted by bouts of dancing and cuddling! Things get stranger and stranger for poor Ephraim, who battles an angry seagull (who, perhaps, is only trying to warn him); who sees, and even makes sweet love to, a laughing mermaid; who has visions of writhing calamari arms out of Dagon and severed heads out of Tough Guys Don’t Dance; and who is buffeted by the elements and the changeable temper of his bearded boss! And why won’t the old man let him up in the top of the lighthouse, anyway!
And as the picture progresses we accumulate many questions, which we thankfully don’t get hard and fast answers to! There’s a climactic moment that hearkens back to movies like Pulp Fiction and Kiss Me Deadly, ha ha, and a salty atmosphere that recalls Curtis Harrington’s early picture Night Tide, or the Ray Bradbury book Death Is A Lonely Business! The picture has a Bergman thing going on, and it made me think of Antonioni’s L’Avventura too, and Coleridge and the Doré engravings, and, like Moby-Dick, with its flensing, and King Frat, with its farts, it’s not afraid to get gross! And it’s got an appearance by a mermaid, which happens sometimes in movies - ha ha, just look at Local Hero or Beach Blanket Bingo!
So you can see there are a lot of influences at work on this picture, but it skillfully avoids the feeling of pastiche! I like the way seafaring myth and legend bubble and boil around the story like foam, but never fully intrude in any direct way, leaving all sorts of interpretation to the viewer! And, ha ha, it’s funny, too! I enjoyed myself and was glad to have seen it, in all its square aspect ratio, on the big screen! I give The Lighthouse three fish vaginas!
Posted by Burl at 08:35

Email ThisBlogThis!Share to TwitterShare to FacebookShare to Pinterest
Labels: 21st century, boat, drama, horror, island, oddball, saw it on a date, saw it on the big screen