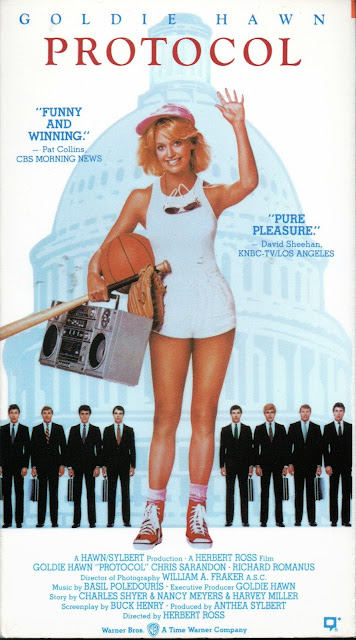 With a ditzy smile and a wave, it’s Burl, here to review a Goldie Hawn movie for you! Ha ha, I don’t think I’ve seen many Goldie Hawn movies, and certainly none from her 80s batch! Nope, never seen Private Benjamin, never seen Overboard or Bird on a Wire or Swing Shift, never even seen Wildcats! I think I saw Foul Play once, and maybe Best Friends for some reason, and at some point in the future I’ll probably have a look at Seems Like Old Times! Still, considering what a big star she was, there’s not much Goldie in my movie-watching history!
That’s why I thought I’d tackle Protocol! Ha ha, I’d never heard much of anything good about it, but occasionally, as with All of Me or The Money Pit, I’ll watch a mid-80s comedy for just no real reason at all! So I put it on and let ‘er unspool!
Well, Goldie plays some kind of sexy waitress at a jungle-themed Washington, DC, strip club, one of those PG-rated strip club where no one actually strips! One evening she accidentally saves an emir from assassination, and her grateful government gives her a job in the protocol office! This is all very contrived of course, but that would be forgivable if, as is the case with a similar picture from the same era, Spies Like Us, it was just a tiny little bit funny! But it’s not, ha ha! It’s not funny at all! The only time I came close to chuckling was when Goldie decided to host a party for the emir at her old peeler bar, and the club owner put up a banner reading “Welcome Amir!”
When I saw in the credits that there were some experienced character actors in the cast, and that the screenplay was by Snyder himself from Grumpy Old Men, Buck Henry, I thought maybe I was in for an unheralded treat! Nope! It’s a dreary, laffless exercise! Pondering this, I thought maybe it was actually a clever and pointed political anti-Gipper satire in disguise, some kind of Iran-Contra analogy perhaps! Nope again, I’m pretty sure! I sought in vain for an Ollie North stand-in, or a lightly disguised Sandinista!
But like I say, there’s at least a solid supporting cast! The emir is played by Richard Romanus from Mean Streets, and his buddy, a party animal guru, is André Gregory, André himself from My Dinner With André! Chris “Fright Night” Sarandon is the love interest with whom Goldie has absolutely no chemistry! Cliff De “Secret Admirer” Young is doing his besuited slimeball thing, which requires, and gets, no effort from him; and we also get both Kenneths: Kenneth “For Keeps” Mars and Kenneth “Dune/’Salem’s Lot/Malone” McMillan! Plus there’s a secret cameo from another future Fright Night alumnus, Amanda Bearse, playing a soap opera actor, and familiar faces like Archie “Innerspace” Hahn and Paul "The Devonsville Terror” Willson as T.V. newscasters! And don’t forget a friendly appearance from Al “Die Hard” Leong as a cook!
I suppose I’m itemizing the (mostly wasted) supporting cast this way because, ha ha, there’s not much more to talk about! It’s also a way to offer you links to better and more interesting movie reviews! This is a lousy picture: it’s boring, it’s repetitive and it has a grindingly abrasive party scene that feels as though it will last forever! Grasping for something on the plus side, I’ll say that the treatment of Goldie’s gay roommates was refreshingly mature for the period, and it's always nice to hear dotty-Ronnie jokes! Anyway, I give Protocol one half of an exploding electric toilet!
Posted by Burl at 10:23