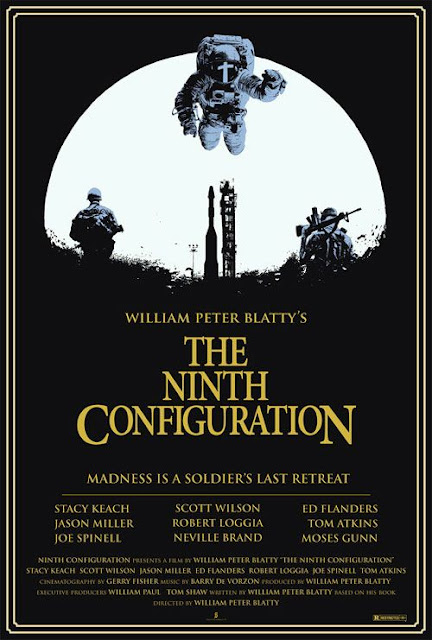 Ha ha and mop dogs, it’s Burl, here to review a truly unusual picture! Yes, it’s William Peter Blatty’s The Ninth Configuration, and it’s truly one of those movies that you ponder on - as the name of that movie podcast goes, How Did This Get Made?
Of course, the glib answer to that question is: The Exorcist! Even though he wasn’t the director, Blatty got himself some credit in the Hollywood bank with that one; or maybe the executives got confused because his name also was William! At any rate, six or so years after the big devil hit, he got to take a terrific all-dude cast to Hungary or somewhere, put them in a castle and get them to act all crazy! And then he called the result The Ninth Configuration, or sometimes Twinkle, Twinkle ‘Killer’ Kane! Ha ha!
Though later Blatty would make the strangely terrific Exorcist III, this was his first adventure behind the camera! He had the presence of mind to hire the great cinematographer Gerry Fisher, a favourite of mine (he also shot Malpertuis, which this movie resembles in some ways), but the Blattster was not what I would call an accomplished and elegant filmmaker! The picture comes off a bit stagy, which is perhaps not a surprise as much screen time is given over to one character’s attempt to adapt Shakespeare’s plays for dogs!
There’s not so much a plot as there is a bunch of fine actors doing crazy things and riffing on the usual teleological arguments for the existence of God! The setting is a castle, ostensibly in the Pacific Northwest, repurposed as a treatment center for servicemen who’ve gone bats, or possibly are only pretending to have gone bats! New psychologist Colonel Hudson Kane, played by Stacy Keach from Escape From L.A., arrives on the scene, and seems to fit in all too well with the inmates! Scott Wilson from Blue City and Malone plays Cutshaw, an astronaut who panicked during the countdown (he’s the astronaut Regan warned in The Exorcist, ha ha!); Jason Miller hams it up as the Shakespeare-for-canines point man, with Joe Spinell from The First Deadly Sin helping him out; Moses Gunn wears a Superman outfit and George Di Cenzo tries to walk through walls; Robert Loggia from Innocent Blood and Alejandro Rey from Mr. Majestyk play other patients; Ed Flanders from ‘Salem’s Lot is the physician in charge, though he's hard to differentiate from the other patients; Neville Brand from Without Warning and Tom Atkins from Halloween III play some of the guards! Whew! So you can see what I mean about that cast, ha ha!
Of course there’s the question of, first, whether the men are mad or merely pretending to be, or else, like Hamlet, fervently pretending to be in order to stave off true madness; and the old problem of whether the doctor is crazier than the patients is also raised! Ha ha, with Keach’s intensely somnolent performance, how could it not be! But even with these colourful characters and pressing problems, the grey cloud and constant rain outside this castle, and the clammy atmosphere within, become oppressive, and we’re grateful for a change of location in the third act! Yes, this new location is a biker bar, where first Cutshaw and then Kane are turned into living beach balls, and beaten and humiliated by a gang led by Stryker himself, Steve Sandor, and also Richard Lynch from The Premonition, both of them dolled up in eyeliner for some reason! But when Kane reveals his true nature, there comes one of the most cathartic bar fights ever committed to film, and the eyeliner gang is left lying in puddles of blood and beer! Ha ha!
As teenagers my friends and I were very much into this movie, ha ha! We had not one but two book versions of it, one called The Ninth Configuration and the other Twinkle, Twinkle ‘Killer’ Kane, which we traded around and quoted lines from! We were not so much into the theological arguments made throughout the picture and its literary companions, which seemed very Intro Philosophy even then! No, I think the appeal came more from how funny it all was! This was so at odds with what we expected from the guy who wrote The Exorcist that it seemed a string of delightful surprises from beginning to end!
It seems less so now, though it’s still frequently funny! Blatty’s dedicated Catholicism now feels overwrought, and Cutshaw, the chief doubter in the company, a little more like a straw man than he used to! I still feel fondly toward this unique motion picture, because where else are you going to see something like this! Ha ha, it’s a true meli-melo, and I’m going to give The Ninth Configuration two and a half moplike dogs!
Posted by Burl at 11:59