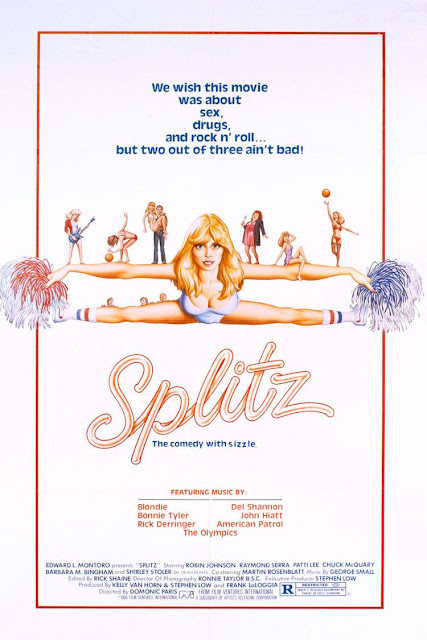 Good day, it’s Burl! Yes, I’ll be reviewing a movie for you, and the picture under discussion today is a collegiate comedy called Splitz! In fact it’s a sort of hybrid: part collegiate comedy, with the standard issue competing Greek houses and the usual grumpy dean, and part good-time rock ‘n’ roll let’s-put-on-a-show show! Ha ha!
All of it is sort of, kind of, not really tied together by copious amounts of narration, which is of course usually the last gambit of a desperate filmmaker! Our narrator is a guy named Chuck, who may or may not be a college student, and who manages an all-girl band called Splitz, or possibly The Splitz! Either way their tunes are pretty poor, and not made to sound any better by the presence of real bands like Blondie on the soundtrack! Still, we get to see the ladies play the actual CBGB’s stage at one point, and that’s a nice treat! Band leader Gina, a tough New Yawk broad played by Robin Johnson of D.O.A., has a mobster dad, essayed with all the mafia clichés by Raymond Serra from Wolfen, and the whole subplot of Chuck trying to get them a decent gig is solved merely by the dad exerting his influence over the owners of “the hottest club in town!”
Meanwhile, for absolutely no particular reason, the band get themselves mixed up with an underdog sorority at nearby Hooter College, ha ha! Yes, that’s the name they came up with, and it really says something when you can’t find it within yourself to be as clever as a movie like King Frat, which, as you’ll all recall, took place at Yellowstream College, or Up the Creek, with its Lepetomane U! The dean of Hooter College, played by the imposing Shirley Stoler of Grumpier Old Men, is called Dean Hunta, and the filmmakers steal a gag from Mel Brooks by having thunder roar and lights flicker every time her name is spoken aloud! 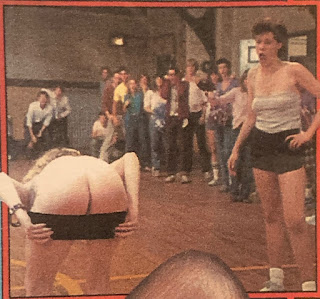 But speaking of gags, there are very few in this picture! In fact there was only one laff in the whole thing, a visual gag that accompanies the dean's cry of “There’s a lot at stake!” That made me say ha ha! Otherwise it’s pretty bereft of uproariousness and ribaldery! Somehow it all comes down to a series of sports contests between the sorority houses, and one of these is a game of strip basketball, ha ha! There is indeed a bit of stripping, but not so much as some of you fellows would probably wish for!
One more curious note: the picture was shot by, of all people, the British cinematographer Ronnie Taylor, the same year he shot Gandhi! That’s mighty weird, I have to say, and stranger still, the movie nevertheless has the same dishwater East Coast look of such contemporary fare as Cherry Hill High or Cheerleaders Beach Party! Ha ha! Anyway, for this odd hire and for showing CBGB’s in action and for the one effective joke, I give Splitz one single cleavage fish!
Posted by Burl at 14:38