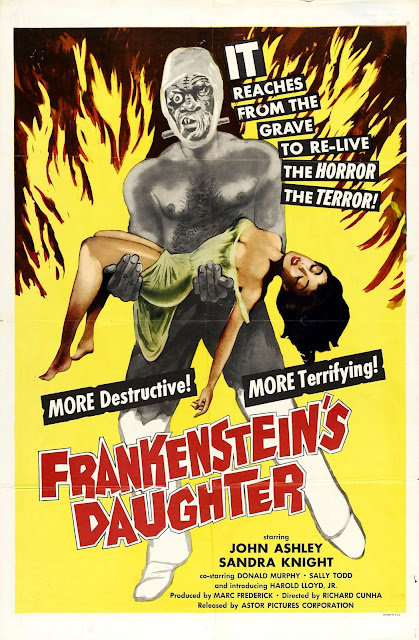 Ha ha and monster makers, it’s Burl, here with a review of another of the Four Cunhas! That is to say, another one of the quartet of movies made by Richard Cunha in 1958! I’ve already reviewed Giant From the Unknown for you, and today it’ll be Frankenstein’s Daughter! (Ha ha, She Demons and Missile to the Moon will come along sometime in the future, I’m sure!)
This one is maybe not the best of them, but it’s got a certain something! Our story is set in the house of a scientist, an elderly German called Carter, the type of kindly scientist who’s trying to perfect a serum for the good of mankind! But his assistant, Oliver Frank, has a different sort of project in mind! Oliver is nightly turning Carter’s niece Trudy (played by Sandra Knight from The Terror, the future ex-Mrs. Jack Nicholson) into a monster, in which form she roams the streets scaring her friends with booga-booga! Oliver spends much of his time either gaslighting Trudy or clumsily macking on her, and her boyfriend, played by John Ashley from Beach Blanket Bingo, unwittingly helps the bad guy out! Frankly the boyfriend does not seem like the swiftest boat in the fleet, ha ha!
Oliver Frank, who's an especially prickish bad guy, abuses his goblin-like assistant and says things like “From here on in I decide what’s evil!” Of course he turns out to be not Oliver Frank but Oliver Frankenstein, and soon he's constructed a monster out of some of Trudy’s friends! There’s a rampage, some biffing and bashing and some pretty stiff neck-twists, and finally rough justice is meted out when Oliver Frankenstein gets a face full of acid!
There are some real 1950s delights on view here, like a boss pool party at where a clean-cut band keeps the groove, while enormous skewers are barbequed and the twentysomethings dance like apes! But we’re expecting the Frankenstein monster to rampage through the party and biff people into the pool, and it just never happens! There’s a lost opportunity for you, ha ha!
And speaking of the monster: this picture has taken a lot of grief for the gooper-faced makeup, even from Cunha himself, but you know what? I like this monster, and I even think it’s kind of scary! Ha ha, still, I can’t deny it’s a little chonky! But it’s chonky-charming, if you know what I mean! The acid-burn makeup and the monster-Trudy makeup (all fangs and heavy eyebrows) are less endearing though!
It’s a modest little picture, and it seems to go on forever, and it’s got some major missed opportunities too! But it also has the 1950s monster charm I love so well - the kind you find in pictures like Monster of Piedras Blancas or Monster on the Campus! I give Frankenstein’s Daughter one and a half swinging bookshelves!
Posted by Burl at 22:46