Burl reviews Children of the Corn II: The Final Sacrifice! (1992) 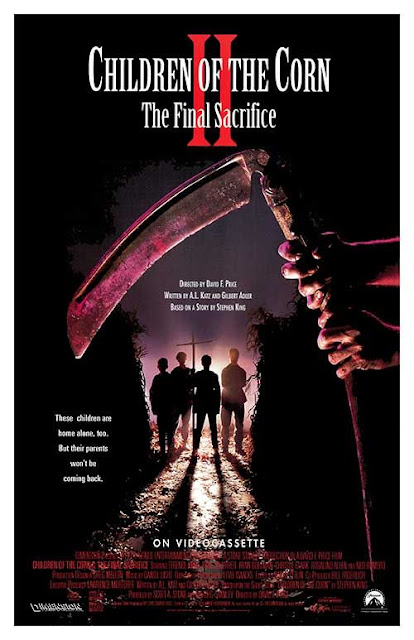 Great cobs of corn, it’s Burl, here to review another sequel! This one is Children of the Corn II: The Final Sacrifice, and of course it’s the Final Sacrifice in the same way as Friday the 13th part 4 was the Final Chapter! Which is to say, ha ha, there were a thousand more brain-dead sequels that came after the supposedly final one!
I have an unreasonable fondness for this ol' cronker, though, and I’ll tell you why! Certainly it’s not because the movie is any good - it’s not! - but more because of the circumstances in which I first saw it, way back in 1992 or so! My then-girlfriend and I were driving back from somebody's wedding, I remember, and we saw a movie theatre with that long title on the marquee! So we stopped the car and, still dressed up in our fancy weddin' clothes, strolled in, bought some popcorn and settled back to watch this opus! We had a great time and it’s a pleasant memory!
But that’s about where the fondness stops, ha ha! If you’ve seen the original Children of the Corn, or read the Stephen King story, you’ll know that it involves the murder of every adult in town by the children of Gatlin, Nebraska, who are under the influence of a pagan corn god known as He Who Walks Behind The Rows! This picture, which came along eight years after the first one, takes things up as the outside world discovers the bodies and tries to figure out what to do with the children!
Into the world of Gatlin, and a neighboring town called Huppleburg or something, comes a tabloid reporter called John Garrett, played by husk-y Terence Knox from Lies, in the company of his near-adult son Danny, who looks a little like Emilio Estevez and with whom John endlessly bickers! Ha ha, this bickering quickly becomes tiresome, and the murder scenes with which the picture is punctuated are great respites from it!
The two Garretts have many adventures among the maize! They each find love: Garrett the Elder with Rosalind Allen from Ticks, while the Younger meets cute Christie Clark from A Nightmare on Elm Street 2:Freddy’s Revenge! An ingratiating fellow named Frank Redbear teams up to help out with the mystery, pointing out that the corn is moldy and might be making the children crazy! He equally suspects the involvement of an evil corn god, however, as well as a problem with the koyaanisqatsi! Meanwhile, there are murders: flying corn products take out two newsmen; a house squashes an old lady; a doctor is poked by knives and needles; a random fellow gets the world’s worst nosebleed thanks to some voo-doo; and a whole mess of townsfolk are incinerated in a meeting hall! Most of these crimes are committed by the children, but the cornfields themselves take on some of the work as well!
The picture proceeds on the same theory as its predecessor: that if you cast a young adult as a teenager, put him in an Amish outfit with one of those flat hats and caution him never to smile, he’ll automatically turn creepy! Also like its predecessor, He Who Walks Behind The Rows is represented by a traveling furrow of earth, as if it was the gopher in Caddyshack turned bigger and meaner! It’s too bad we don’t ever get to see this corn demon, which shoots blue lightning at people before either killing them or possessing them! We do get a brief look at a corn-demon pizza-face on the lead corn-child, Micah, before he gets swallowed up by a big corn husking combine!
The picture offers too much filial bickering; a bit of gore here and there; some squirmy, silly murders; and a happy, strangely touching supernatural ending for Frank Redbear! Altogether it’s not a great movie and not a good one, but it’s an acceptable autumn time-filler that, I can tell you from experience, plays a lot better on the big screen! I give Children of the Corn II: The Final Sacrifice one and a half cobs of stupid old corn!
Posted by Burl at 14:30

Email ThisBlogThis!Share to TwitterShare to FacebookShare to Pinterest
Labels: 1990s, horror, saw it on a date, saw it on the big screen, sequel, Stephen King, supernatural