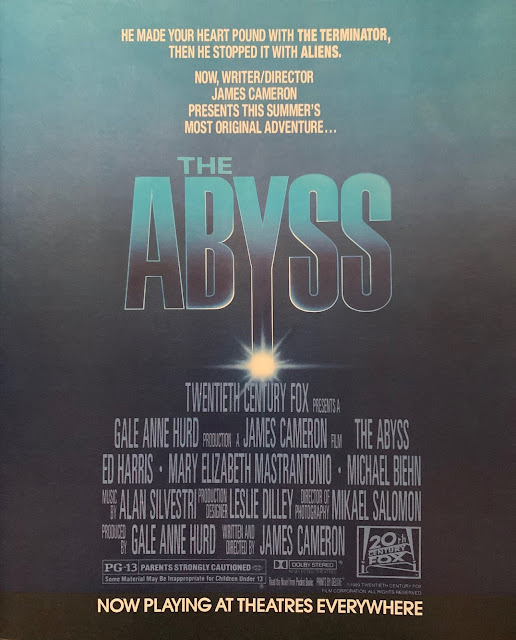 Blub blub it’s Burl! yes, I’m underwater again, and it’s 1989, so I must be reviewing Leviathan! No? Oh, ha ha, then is it Deep Star Six? No? The Rift? Endless Descent? Full Fathom Five? Okay, last guess: The Abyss!
Of course it is the James Cameron picture, famous for its difficult shooting conditions and the subaqueous martinet at its helm, that we’re discussing today! It was partly shot in an abandoned cooling tower owned by Earl Owensby, where a big model undersea base was built, and the actors and crew had to swim around like crappies! Ha ha, it’s funny to think of even the least little touch of Owensby on this big giant Fox production!
Anyway, the tale tells of a gang of roughbusters who man an underwater oil drilling unit; and never mind the environmental sketchiness of this idea, but the blue-collar posse somehow ingratiates where the analogous roughbusters in Armageddon make you hope their oil rig will be hit by advance meteor shards as soon as possible! The guy in charge is Ed “Creepshow” Harris, playing Bud, and he’s just a regular fella, regular as a bowl of prunes! His ex-wife, Mary Elizabeth Mastrantonio, the lady from Scarface and Slamdance, and who happens to have designed the underwater oil drilling base, descends to the rig with a bunch of marines led by a mustachioed Michael Biehn, well-known from Navy Seals and other Cameron pictures, like Aliens! The idea is that they’re all going to cooperate to find the missing submarine!
Biehn, already kind of a jerk, is busy getting worse from some kind of pressure madness! The appearance of underwater aliens hastens this process, and soon (well, not soon: this is a three-hour movie!), he’s sending a recovered nuclear torpedo on a collision course with the alien ship! Along the way there’s plenty of yelling, bubbles, a punchfight or two, miraculous alien water tendrils, a lot of salt-of-the-earth grassroots-folk stuff, and the surprising revelation that salt-of-the-earth grassroots folk, in addition to being good with tools and fond of jargon, are committed pacifists! Ha ha, that’s a message I can get behind!
The aliens themselves look like angelic parameciums and are not completely ungoofy, especially in a shot of one of them taking Ed Harris by the hand and guiding him Peter Pan style toward their big ship, but this almost doesn’t ruin the movie! Ha ha! Most of the picture holds together well, plays with reasonable seriousness, and serves as a solid underwater adventure! All the acting is good - Harris channels Ralph Kramden, Mastrantonio creates a unique "likeable bitch" character, and honestly, I think this is Biehn’s finest hour - and the verisimilitude Cameron was going for is there in spades! Whether Ed Harris, who vowed never to talk about the experience of making this picture, now considers that it was worth the trouble is unknown to me! Probably not! He probably thinks more fondly on something like The Right Stuff, where he was way up high instead of way down low, or Apollo 13, in which he got to wear a snazzy white vest!
I tend to credit the underwater pictures more than they deserve, and maybe that’s true of The Abyss also! But the fact remains that I both enjoy it and am impressed by its determined physicality! For the first two thirds anyway, ha ha! And the death of Biehn, smashed like an egg, is particularly memorable! I give The Abyss two and a half elbows to the tape player!
Posted by Burl at 21:28