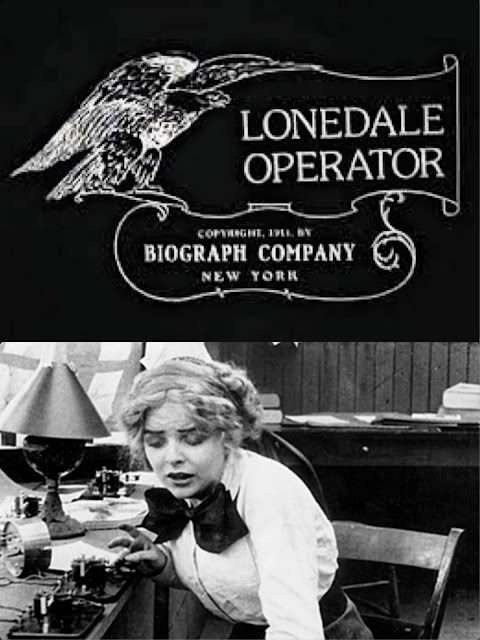 With a silent ha ha, it’s Burl, here to review The Lonedale Operator, one of the hundreds and dozens of short subjects that D. W. Griffith made in the days before his ambition brought him to make Birth of a Nation, Intolerance, Broken Blossoms, and all the rest of the pictures that made his reputation for both good and ill! Ha ha, I think this might be the first silent picture I've reviewed for you since Eternal Love, and I found it on a compilation tape of old silent railroad dramas! There were a couple of Griffiths on that tape, and a less interesting film about rescuing an old grouch from an oncoming train that was produced by Thomas Edison’s company, and a little mini-documentary on the railroad genre as well!
But The Lonedale Operator was well worth a gander! If you’re anything like me, you’re wondering “Ha ha, but what does he operate? A station? A telephone exchange? A train?” It turns out he’s a telegraph operator, but he’s feeling poorly that day and turns over the operation of his post to his lovely daughter! She’s having an affair of the heart with a train engineer, and they share a happy moment before he zooms off in his iron horse!
The next thing you know another train arrives, this one bearing the payroll! But it’s also bearing something else: two rail-riding hobos who climb down from the rods and observe our pretty young operator hauling the heavy cash bag into the station! Ha ha, they seem to say as they rub their hands together with glee! An easy mark! Or so they think!
The young damsel espies these rascals lurking outside her window and almost falls into a faint, but manages to lock the door just in time! As the scoundrels begin bashing their way into the hut, she hurries to send a telegraph of her predicament to the next station down the line - but the operator there is asleep, the dirty dog! The bandits are that much closer to getting in - the door is starting to buckle! Meanwhile the sleepy telegraph man wakes to hear the frantic beeping! He conveys the situation to the young engineer, who jumps into his train and speeds to the rescue!
But alas, he might be too late! The hobos have crashed through two doors now and are in the telegraph office! But wait! What’s that shiny object in her hand? It must be a gun, and the two would-be thieves are kept at bay until the engineer and his fireman burst in! And what was the metallic item in her hand? Not a gun, but a wrench! The two rapscallions offer humble bows before the bravery and bluffing artistry of the heroic young woman! The end!
So it’s got a pretty good plot, but it’s a noteworthy bit of cinema too, being one of the hundreds of one- and two-reelers Griffith made for Biograph, where he was helping to figure out the visual language of narrative cinema, ha ha! He hadn’t fully gamed out reverse shots yet, or eyelines - the bandits outside the window are not at all in line with where the young woman is looking, for example! But on the other hand there are thrilling shots taken from the train’s tender, and a great early example of crosscutting for suspense! It’s a sweet little country thriller, and I give The Lonedale Operator two and a half enormous black bowties!
Posted by Burl at 00:56