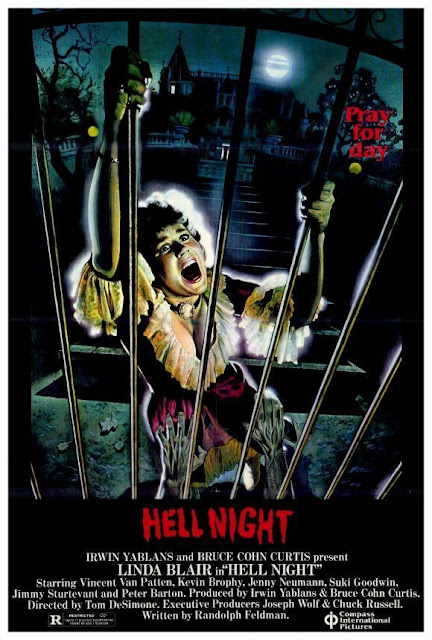 Ha ha and H-E-double hockey sticks, it’s Burl, here to review another Halloween-themed slasher picture! Ha ha, this one is called Hell Night, and it was even produced by Irwin Yablans, whose Compass International Pictures helped bring us the original Halloween! But make no mistake, this isn’t Halloween!
No, it’s Hell Night, and that means we start at a frat party with everyone in costume! It’s time to rush the pledges, and this means frat bros Peter and Scotty, and their comely accomplice, are going to send four unwitting students into Garth Manor for the night, but not without telling them that, after old man Garth held a murder party for his family, one of the deformed brothers, or "gorks," per the dialogue, was supposed to have survived, and gorks around the manor to this day! And of course this turns out to be true!
Our frosh quartet includes Linda Blair, perhaps best known from Nightforce and Roller Boogie, in the role of Marti, whose defining characteristic is that she can fix cars! There’s fresh-faced Peter Barton, who also faced a maniac in Friday the 13th part 4, playing Jeff, and who tells a tale of the time he saw a three foot man with a long beard, a green jerkin, curly boots and a tall, pointed cap, and concluded that it must have been an elf! We also get Vincent Van Patten, whom we know from Rock n’ Roll High School, as Seth, who spends most of the movie wearing comical boxer shorts and repeating “My name is Seth!” Then there’s a lady with a British accent: Suki Goodwin as Denise!
Kevin Brophy, who plays Peter the frat bro (he also played Peter in Time Walker; and maybe it’s the same Peter! Ha ha!), does so with enough good humour that he doesn’t come off as repellent as most frat bros do in movies like this! He’s got an assistant jokester, a glasses guy who sports a parrot on his shoulder but otherwise seems to be dressed as a waiter in an Italian restaurant! The glasses guy catches a pretty stiff neck twist, and, as with a similar scene in The Prey, a fake buttocks was used!
Hell Night is long for a slasher picture, somewhere north of 100 minutes; and in all that time you get an awful lot of lurking in tunnels, hallways and gardens! It’s a little disappointing, because they had a back story with lots of potential, and a good, scary house to work with, lots of turrets and wrought iron; but director Tom De Simone, who came to the horror genre after a long career in pornoo, was not up to the challenge of making any of it scary! Although there are a few good moments: a great shock cut from a POV shot to a wide of the gork; a mildly scary walk from the front gate up to the door of the house after the characters have finally become aware that a gork is lurking; and a moment with a gork rising up from under a carpet, where there’s a hidden trap door!
But it’s a pretty cozy, good-natured affair overall, though it’s more gorky than it is gory! It’s pretty reserved as these things go, and, I'm sad to say, offers very little pep! On the other hand, it does have not one but two gorks, and both of them are mildly deformed, so we do indeed get some Special Makeup Effects in the end! Most of the deaths are pokings or defenestrations, or in some cases are not really seen at all! It is in other words a perfect slasher movie for people who don’t like slasher movies, and I give Hell Night one and a half shoulder parrots!
Posted by Burl at 01:00