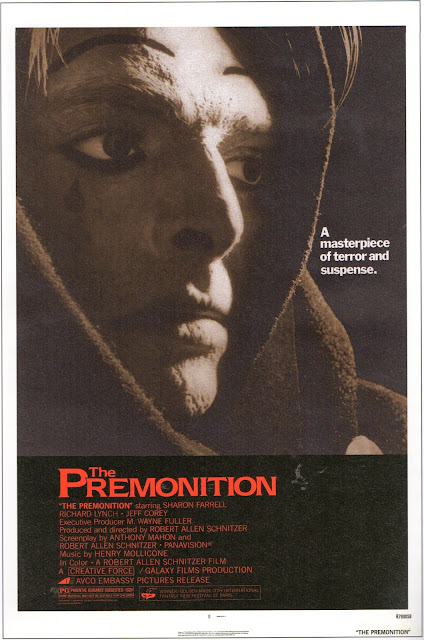 Hi, It’s Burl! You must now deal completely within the metaphysical system, ha ha! And of course what I mean by that is I’m here to review a strange and mystical horror picture for you today – a movie you would do well to consider watching yourself sometime, if you can find it!
From the late 60s into the middle 1970s, there existed a microgenre I call Hippie Horror! Maintaining the broader definition of the term, we include under it movies like Hex, Premonition (the Alan Rudolph picture, no relation to this one!), A Name For Evil, Let’s Scare Jessica To Death and Simon, King of the Witches! There are lots of others too, and while they don’t all involve hippies, they generally have a mystical theme or flavor to them!
That’s certainly true of The Premonition! It begins with a nervous lady, Andrea, newly released from the bughouse, pairing up with Jude, a clownman at a local circus whom she’d met while institutionalized! Her goal is to reclaim her daughter (played by Danielle Brisebois of Big Bad Mama II fame) from the couple who’d adopted her long ago, and who are certainly her parents now! With the help of the clown, Andrea makes a nighttime kidnapping attempt, but is interrupted by the mother, and only manages to kidnap the little girl’s doll!
The clown goes crazy and puts a savage poking on Andrea! But she’s still very much a part of the movie, as her supernatural influence seems still to be working overtime! After a number of dreamlike encounters with Andrea’s shade, the mother gets into an otherworldly car crash and the daughter disappears! The husband calls in his colleague, an earnest parapsychologist who has some ideas of her own, and a rumpled cop played by legendary acting coach Jeff “Curse of the Black Widow” Corey takes on the case, maintaining his involvement even after other police would give up because, as he correctly asserts, “There’s too many weird things going on!” The little girl finds herself at the carnival and in the custody of the increasingly unhinged and murderous Jude, Andrea ends up playing the piano in a field near a hay-munching horse, and all of this leads to one of the strangest concertos ever filmed!
Ha ha, as you can tell, this is an oddball motion picture! It also manages to be quite gripping and occasionally very scary! It’s about the bonds of mother love, and if it doesn’t pit the biological against the de facto varieties, it at least holds them up to comparison! The end of the picture is ambiguous but completely satisfying, and the strange, bleak atmosphere of the movie stays with you after it’s over! It’s also got some fine performances, in particular from Richard “The Sword and the Sorcerer” Lynch as Jude the clown, and Sharon Farrell, who played a similarly distraught mother in It’s Alive, as the adoptive parent!
It’s got a few shaky moments here and there, and some slow stretches, and some flaky mysticism too of course, ha ha, but it never loses your interest! I wholeheartedly recommend The Premonition, and give it three dancing clowns!
Posted by Burl at 12:24