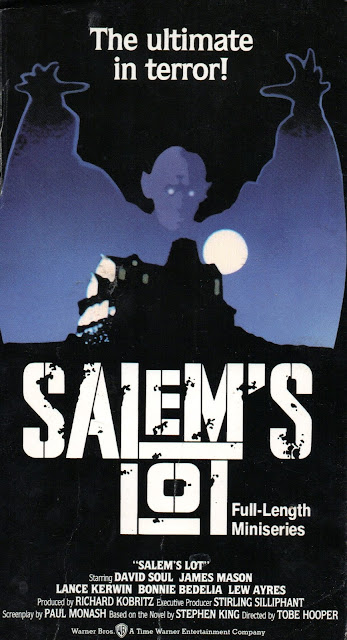 Bluh bluh, it’s Burl, here to tell you all about the vampires! Yes, I’m reviewing ‘Salem’s Lot today – the full length 1979 mini series, which I came across on VHS recently, and of course which was sequelized by none other than Larry Cohen in A Return to 'Salem's Lot! Ha ha, I got a whole box of VHS tapes through the kindness of a family member, all of them like new, and this double cassette was among them! (There was also a double cassette special edition of Hellraiser, and naturally Children of the Corn was in there too!)
Anyway, I was one of the millions of youngsters terrified by ‘Salem’s Lot on its original airing! At least I think that’s when I saw it, though I would have been pretty young! I remember some of the key scenes, like the kid whose younger brother appeared floating at the window (extra scary for me because I had – well, still have! – a younger brother of the same type!) and Mike the gravedigger jumping down into the grave and opening up the coffin! But the scariest scene for me was when the two guys (Mike and somebody else, I think) are transporting the big crate which we know contains the Nosferatu-esque hemogobbler Mr. Barlow!
Ha ha, it was all pretty scary at the time, and while it’s not so much any more, it remains a creepy and well-done television movie, which feels a lot quicker than its three hour running time would indicate! The story, for those who require it, has a writer returning to the small Maine town he was born in (ha ha, yes, as a matter of fact this is a Stephen King story!) and investigating the creepy house he once got spooked by as a child! Coincidentally, a vampire and his friend have just moved into that very house, and soon the townspeople are looking a mite pastier than before! Ha ha!
The picture was directed by Tobe Hooper, the man who later brought us such gems as The Funhouse and Lifeforce, and who at that time had just been fired from directing The Dark! He does an okay job on what must have been a tight schedule and low budget! The real draw, at least nowadays, is the cast, specifically the great James “Bigger Than Life” Mason as the vampire’s friend! Ha ha, he’s a lot like the handyman in Fright Night, in that he isn’t himself a vampire, but appears to have some superstrength and possibly other powers as well! And both of those fellows go down hard as they’re descending a staircase in a menacing fashion! Very similar scenes, ha ha!
Also in the cast we find Bonnie Bedelia, the lady from the Die Hard pictures, as the writer’s ill-fated ladyfriend; Geoffrey “The Fat Black Pussycat” Lewis as the ill-fated gravedigger; George “Massage Parlor Hookers” Dzundza as the ill-fated cuckold; Fred “Moving Violations” Willard as the ill-fated realtor; Ed “Exorcist III” Flanders as an ill-fated doctor; Kenneth “Dune” McMillan as the surprisingly not ill-fated town constable; and a bunch of fine old-timers like Lew Ayres, Marie Windsor and Elisha Cook Jr., who also battled Blacula and is of course well known from his role as Grandpa in The Trouble With Grandpa! Phew, that’s a lot of actors! And I haven’t even mentioned scary-faced Reggie Nalder, who plays the ghoulish head vampire, or Hutch himself, who plays the rather bland hero!
Ha ha, that was one of the big changes from the King book that improved things, I thought – making the vampire more of a hideous bloodsucking animal than the urbane, sarcastic man-‘bout-town he is in the novel! It’s sort of the opposite of Christine, where they got rid of the backseat corpse of Roland D. LeBay! But ‘Salem’s Lot goes for the gusto with this great vampire; and it also pushes the violence about as far as it could go in a 1979 TV movie!
It’s an entertaining and engaging watch, a little chintzy and flat here and there, and too willing to let loose threads flap around everywhere; but overall it’s not too bad! I’m going to give ‘Salem’s Lot two and a half glowing bottles of holy water!
Posted by Burl at 21:30