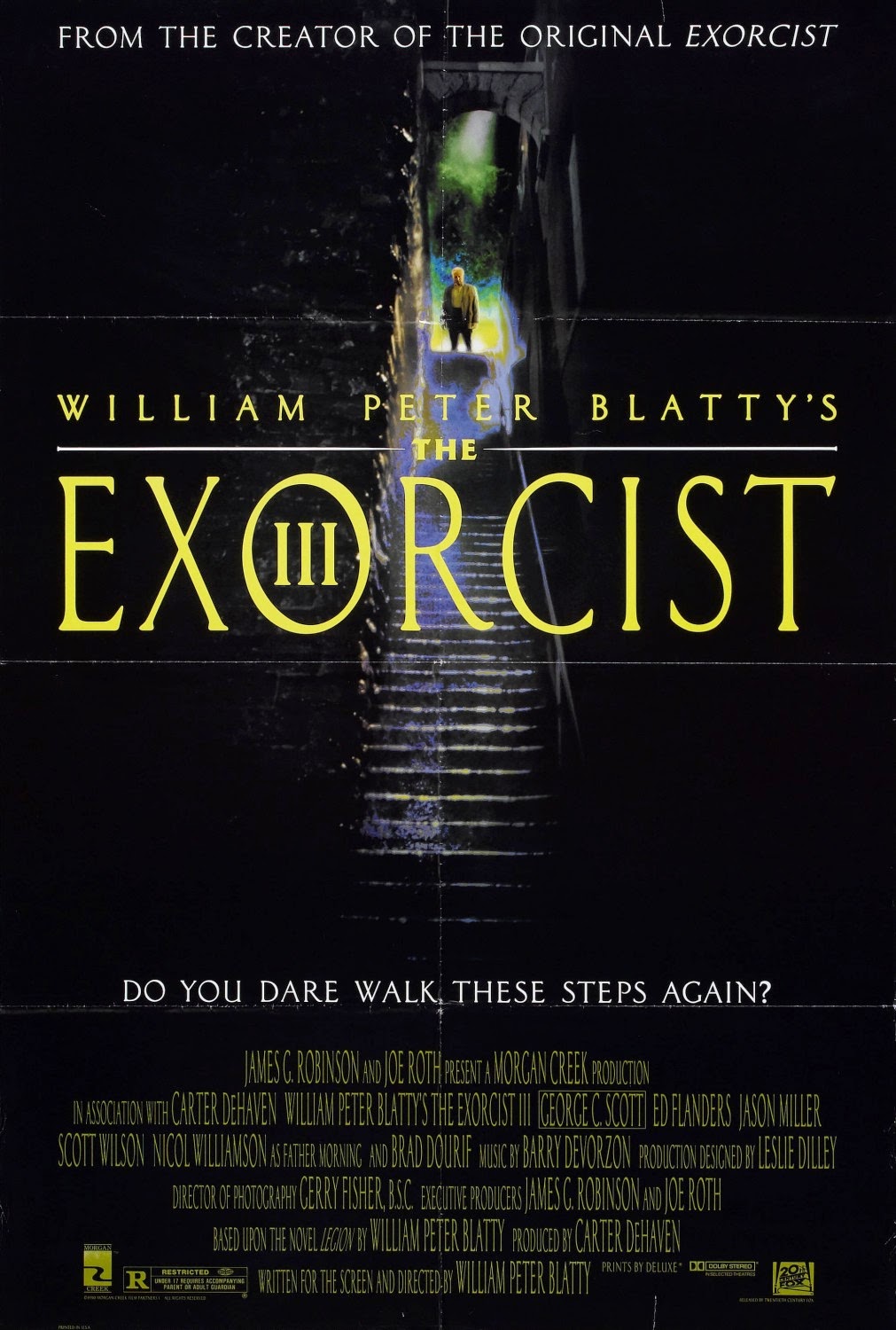 Ha ha, the power of Burl, limited as it might be, compels you to read this movie review! Yes, today I thought I’d talk about Exorcist III, a famously troubled production that, in its intended version, contained neither an exorcism nor an exorcist until some third-act tampering by its producers!
Now, I would have been just fine with that, and I’ve never understood why it was such a sticking point with these producers that they spent millions of dollars, incurred bad press, alienated their writer/director and, not incidentally, badly compromised their movie, in order to celebrate literal-mindedness by shoehorning these scenes in! They sit within the final product about as comfortably as the hospital scenes do within Bad Meat, ha ha!
But much of Exorcist III is gold! The movie takes place, as the dialogue often reminds us, fifteen years after two key events: the Georgetown exorcism of the original picture and subsequent stairway death of Father Karras; and the capture and execution of the notorious Gemini Killer! Now some very Gemini Killer murders have begun again, and grumpy, rumpled (grumpled?) cop Bill Kinderman, played by the great Lee J. Cobb in the original, and by the great George C. Scott here, finds his lack of faith sorely tested by the increasingly supernatural goings-on!
Ha ha, for me the very heart of the picture is the relationship between Kinderman and his pal, Father Dyer, played by the merry Ed “’Salem’s Lot” Flanders! Their scenes together have an appealing, if synthetic, jocularity, and are also very weird and funny! Unfortunately, by the end of the first act Father Dyer has lived up to his name, and the movie suffers for his absence!
Like William Peter Blatty’s earlier directorial effort, The Ninth Configuration, this is an unquestionably oddball picture, and that’s something else I like about it! It’s alternately eccentric, beautiful, eerie and genuinely scary! (Brr, that famous hospital shock scene!) Ha ha, by the second half of the movie, with long scenes of dialogue between Kinderman and the serial killer played by Brad “Dune” Dourif, it becomes something altogether more run-of-the-mill, and fits in nicely with all those other resurrected-killer movies of the period, like The Horror Show, Shocker and The First Power!
The movie successfully weaves an atmosphere in which anything might happen! There’s a dream sequence in which Fabio, Patrick Ewing and Samuel L. “The Avengers” Jackson all appear as angels, and another scene in which the great Viveca Lindfors, known from Silent Madness and many other pictures, tries to cut off a teenage girl’s head with some giant head clippers! There are many gruesome details discussed in the dialogue, and if ever there was a “tell, don’t show” gore movie, this is it! (Until the exorcism scene that is, which gets fairly bloody after poor Father Morning, played by Nicol “Black Widow” Williamson, gets stuck to the ceiling for some reason!)
With its fascinating gallery of actors (all the aforementioned, plus Scott “Blue City” Wilson, Don “The Beast Within” Gordon, Grand L. “Die Hard” Bush, Zohra Lampert from Let’s Scare Jessica To Death and Harry Carey Jr. from UFOria as another ill-fated priest) and marvelous cinematography from one of my favourites, Gerry Fisher (who shot Wolfen, Malpertuis and many others), this remains an appealing movie, if deeply flawed! I’m going to give Exorcist III two and a half bathtub carps!
Posted by Burl at 12:49

Email ThisBlogThis!Share to TwitterShare to FacebookShare to Pinterest
Labels: 1990s, comedy, horror, saw it on the big screen, sequel, supernatural