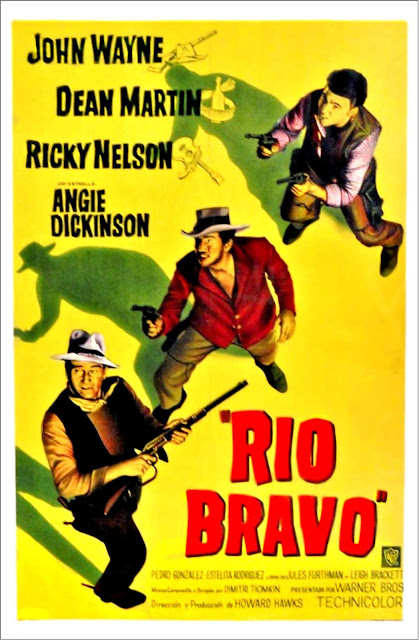 The sun is sinkin’ in the west, the cattle look out at the view, the red bird settles in her nest, and it’s time for a Burl to review! Ha ha, yes, I’m here to talk about that great late-period Howard Hawks picture Rio Bravo, a longtime favourite of mine! Now, I don’t think I’ve reviewed a Hawks picture yet, but rest assured, he’s a director I admire!
And this was one of his best! Yes, it’s got John Wayne, whom we all know so well from Randy Rides Alone, in one of his finest roles in all of Dukedom! He plays Sheriff John T. Chance, who finds himself in a typically Hawksian siege situation with a colourful passel of allies! There’s a great, wordless opening in which Chance’s deputy, a bestubbled inebriate played by Dean Martin in perhaps his finest performance ever, scrounges for a silver dollar tossed into a used spittoon by Claude Akins of TV’s Lobo; this leads to a sudden, pointless murder and the jailing of Lobo!
The movie gets right to it from the beginning, and then unfolds at a leisurely but never draggy pace! In fact, the pace of things is one of this movie’s greatest achievements! Ha ha, all credit to Hawks, screenwriters Jules Furthman and Leigh Brackett, and editor Folmar Blangsted, who has one of the great names in Hollywood editorial department history, for this accomplishment!
The situation comes down to this: Chance with help from his deputy Dude (that’s the shaky-hands played by Dino), his other deputy Stumpy, played by Walter Brennan, the young pistoleer Colorado, essayed by Ricky Nelson, and a cardsmith called Feathers played by Angie Dickenson from Dressed to Kill, must keep Claude Akins in jail long enough for the Marshalls to collect him, without getting plugged by all the fellas who want to break Akins out! Because Akins, you see, is Joe Burdette, brother of Nathan Burdette a local richman with enough fifty dollar gold pieces to hire all the gunmen he wants!
There are all sorts of terrific scenes in the movie, and one of the best is when Chance and Dude follow a muddy-booted gunman into a Burdette saloon! Dude takes the lead in unearthing the fugitive and the scene unfolds beautifully, thanks to some blood dripping into a mug of beer! And of course you can’t have Dean Martin and Ricky Nelson in a movie without a couple of songs, and we get the marvelous “My Rifle, My Pony, And Me,” which I used to sing to my son every night at bedtime! Ha ha, I really do love all the scenes where the fellows are just hanging out in the jailhouse, kicking back, drinking beer and kicking back, waiting to see what will happen!
And there’s a solid gold climax with shootings, punchfights, and explosions! Ha ha, it’s kind of amusing how many Burdette men get plugged by our heroes throughout the movie, in fact, and by the end the bad guys are slinking out with their hands up, claiming to have simply had enough!
It’s one of the most purely enjoyable Westerns ever made, relaxed, professional and beautifully done in every respect! No doubt just about all of you have seen it before, but it’s intensely rewatchable, so I recommend giving it another spin whenever you get the chance! I give Rio Bravo four tumbleweeds and an extra donkey face suddenly appearing at the window! Ha ha!
Posted by Burl at 10:53