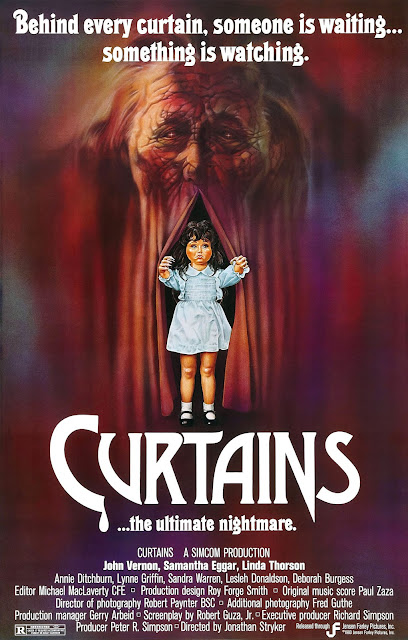 Ha ha, it’s Burl here, reviewing another Canadian horror picture from the early 1980s! It’s called Curtains, and when I say it’s from the early 1980s, I mean it’s from practically all of them! It was shot partly in 1980, partly in 1981, it was finished in 1982 and then not released until 1983 in the US, and 1984 in its native Canada! Ha ha, but the copyright date on it is 1982, so that’s the year I went with!
So yes, this was a Troubled Production! Ha ha, apparently it started out as a story about a 500 year-old banshee who possesses a lady and kills the other ladies in the house with her; something not dissimilar to Incubus! But along the way it changed to a more prosaic story: a tyrannical director named Jonathan Stryker is casting for his newest film, “Audra,” and invites a half-dozen actresses to his house to try out for the role! But one of them is willing to kill for it, ha ha, and so the bodies start a-tumblin’!
Well, I guess there’s some potential there for a mixture of suspense and showbiz satire, but Curtains takes no advantage of this potential whatsoever! There’s some catty drama, and Stryker gets called a bastard a lot, and there is much creeping around the hallways of his hotel-like house, and now and again there is a poking! Ha ha, the best and most Canadian of the killing scenes involves a lady skating on the ice, when suddenly the killer, sporting an old hag mask and hefting a small scythe, skates after her for a little bit of wintertime chopping!
But other than that, there’s not much horror here! What the picture does have going for it is a thoroughly Canadian cast of mostly ladies! The great John Vernon, from Fraternity Vacation and Herbie Goes Bananas, plays Stryker, using his well-deep voice to good effect! Samantha Eggar from The Brood and Demonoid is his old ladyfriend, a famous actress and great star; and the rest of the would-be starlets include Linda Thorson from Sweet Liberty, Anne Ditchburn from Six Weeks, Lynne Griffin from Black Christmas, Sandee Currie from Terror Train, and Lesleh Donaldson from Funeral Home! Creeping around the fringes of the film are such familiar faces as Michael Wincott from Alien: Resurrection, Maury Chaykin from The Bedroom Window, The Sweet Hereafter, and Wild Thing, and Kate Lynch from Meatballs!
At some point late in the production, the producer canned the director and shot a new last act himself! This involves the sudden demise by defenestration of two important characters and, subsequently, a long cat-and-mouse chase in what appears to be some sort of prop warehouse adjacent to the mansion, and then a climactic reveal of the killer’s identity in a kitchen scene, complete with a final poking! All this new stuff sits ill with the rest of the picture, and the whole thing has a ragged, stitched-together feel reminiscent of Bad Meat, ha ha! And the director credit was given to the fictional director played by Vernon!
Wintry Canadian horror pictures can often have a cozy familiarity to them, but Curtains rarely manages this! Some pep and a dose of the red stuff might have helped, but despite the presence of makeup maestro Greg Cannom in the credits, who was responsible, apparently, for “prosthetics,” there are no real Special Makeup Effects in the picture, unless you count the old hag mask and a creepy doll that pops up now and then! Oh, and there's a head in the toilet too! I guess Cannom made those things, ha ha, and maybe the banshee face that they never ended up using! As I said, there's wasted potential all over this thing! I give Curtains one and a half Burton Cummings songs, and that’s mainly for the cast! And the Burton Cummings song too, ha ha!
Posted by Burl at 11:41

Email ThisBlogThis!Share to TwitterShare to FacebookShare to Pinterest
Labels: 1980s, Canada, horror, mystery, saw it on the big screen, slasher