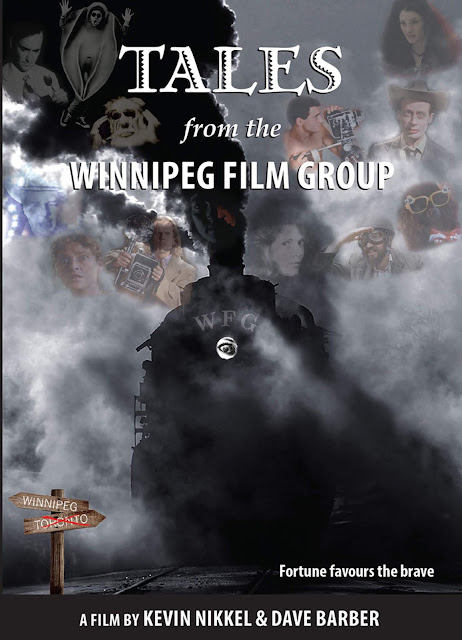 Ha ha, and ticket stub please! Yes, it’s Burl, here to review a documentary about a regional film club called the Winnipeg Film Group, which I recently happened to catch on the Kroger Channel! I like these local movie and moviemaking tales - the last such picture I reviewed was probably 2014’s Out of Print, the documentary about the New Beverly Cinema in Los Angeles!
This one is called Tales from the Winnipeg Film Group, which is a riff on the title of the first feature by one of the Group’s most famous acolytes, Guy Maddin! That picture was called Tales from the Gimli Hospital, and if you haven’t seen it, ha ha, I recommend it! In fact I recommend all of Maddin’s work, particularly a picture called Careful!
Maddin is one of many interviewees in this talking-heads doc: he speaks of playing many hours of ping pong at the film club’s offices, and of his creative debt to fellow film club member John Paizs, the camera-cranker who made a very amusing picture called Crime Wave! Paizs himself is not interviewed for some reason, but much footage from his films, Maddin’s films, and the cinematic efforts of many, many others are excerpted! Ha ha!
There is also some footage of many of the moviemakers at work, using all manner of fascinating techniques to produce their films! There are vintage photos from the club’s early days in the mid-70s, so, ha ha, we get some good outfits and facial hair! The fact that it was largely a bastion of white male enterprise is addressed, and we see that the club has lately expanded its membership to include ladies, people of colour, the queer, and even some Indigenous folk! Better late than never, I suppose!
Of course it all takes place in Winnipeg, that famously remote and chilly city on the plains! It seems an interesting place, and in fact I know it is, having spent some time there myself! Their film club is among the most famous and accomplished in the land, ha ha, so on that basis alone, this documentary production is of interest! Those who are fans of the great Canadian films of the 1970s, from Goin’ Down the Road and Black Christmas, to Between Friends and Rip-Off, to Homer and Paperback Hero, will find themselves hooked!
There are plenty of tangents taken and amusing stories told in the course of the movie, but the unfortunate thing is that this film about filmmaking rarely sings as a filmmaking exercise itself! The editing seems too frequently arbitrary - you can see where the filmmakers have inserted shots simply because they need something there! Ha ha, the wallpapering is at times pretty egregious! And there are far too many literal gags: if someone mentions fire, we see a shot of fire! If the floor is mentioned, there’s a shot of the floor! Ha ha, having so many miles of other people’s films to choose from was perhaps not the advantage the makers of this doc supposed it was!
So at times one wishes this was better made, but mostly the subject matter is compelling enough to make you forget that! I’m glad the picture was made, and would hope to see other such histories from other cities! I give Tales from the Winnipeg Film Group two and a half jumping cats!
Posted by Burl at 15:11