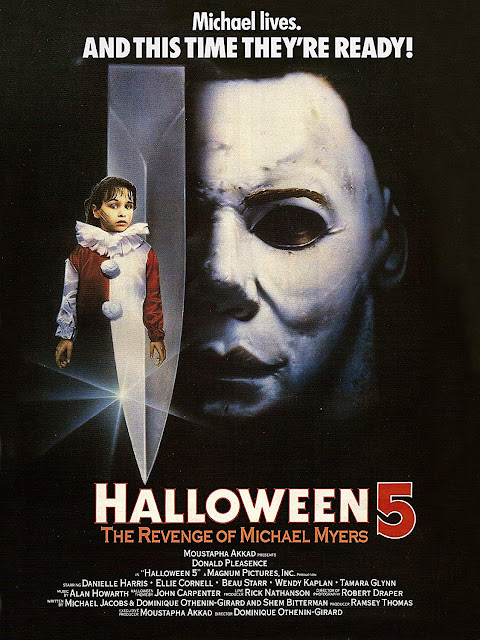 Ha ha ha, ha ha ha, ha ha ha ha, it’s Burl! Yes, in case you didn’t catch it, that was me trying to laugh John Carpenter’s theme from Halloween! It’s a cheap trick, so is an entirely apt way of introducing a review of Halloween 5, which itself counts as a cheap trick on anyone who ever enjoyed a Halloween picture! It's surely no treat! (And, just to be clear, while the full title on the poster is Halloween 5: The Revenge of Michael Myers, the title card simply reads Halloween 5, so that’s what I’m calling it too!)
This foul cronkite follows directly from Halloween 4: The Return of Michael Myers in the same way that Halloween II followed the original Halloween, by showing the last few moments of the previous picture! Unlike Halloween II, it then proceeds to utterly betray the spirit of its predecessor by ignoring the disturbing set-up in which a nine year-old girl becomes the fearsome primal killing force behind the now traditional late-October pokefest! Ha ha!
As in the previous picture, the little girl, Jamie, is played by Danielle Harris, whom we saw recently in Once Upon a Time… in Hollywood! Ha ha, she really gets put through the wringer in this one, not just by Michael Myers and his poking knife, but by the increasingly hoarse-voiced and crazy Donald Pleasance, who of course returns with a putty on his face to play the burn-scarred Dr. Loomis! He alternately shouts at and pleads with the little girl in a seemingly endless series of scenes, when in reality such a person would never be allowed near a child, no matter how much of a psychic connection she may have to her supernatural maniac uncle! Ha ha, Maniac Uncle would have been a good subtitle for this one!
The sheriff from the previous picture, the one played by Beau Starr from Fletch and Summer School, returns too, but the action is so confused that I can’t be sure if he survives this one! Other victims include a faux-Fonz called Mikey, played by Jonathan Chapin from Rubin and Ed, who is obsessed with his sweet Camaro and catches a gardening implement in the head! A mid-picture sequence set at a party farm gives Michael a chance to diversify from his kitchen knife and use a few other agrarian tools on his victims, like a pitchfork and a scythe!
I’ll tell you, this is an incredibly scattershot production, lacking in many things but especially in a good script! People are always running from one location to another, and nothing makes any sense; and a fancy-booted man is clomping around the town with no discernible goal in mind! Just about every character is a jerk or an idiot, and you’re glad to see them dispatched just so you don’t have to hear their grating voices or see their smarmy faces again! The opening credits imply the presence of Special Makeup Effects in the picture, and indeed there are brief, near-bloodless flashes of the old KNB artistry in the picture! But they’ve been trimmed to within an inch of their lives, ha ha!
The story seems to have been made up as they went along, the dialogue is bad, and the acting, for the most part, is worse! (The little girl is quite good though!) There is no hint of style to the direction, the picture is completely free of any Halloween atmosphere, and it’s not very well photographed, except for one decent shot of Michael appearing in a dark forest! If not for the existence of Halloween: Resurrection - which I’m not even sure I’ve seen, or at least don’t remember much of, but have heard is very bad - I would say this is far and away the nadir of the Myers saga! I give Halloween 5 one cookie woman!
Posted by Burl at 13:08