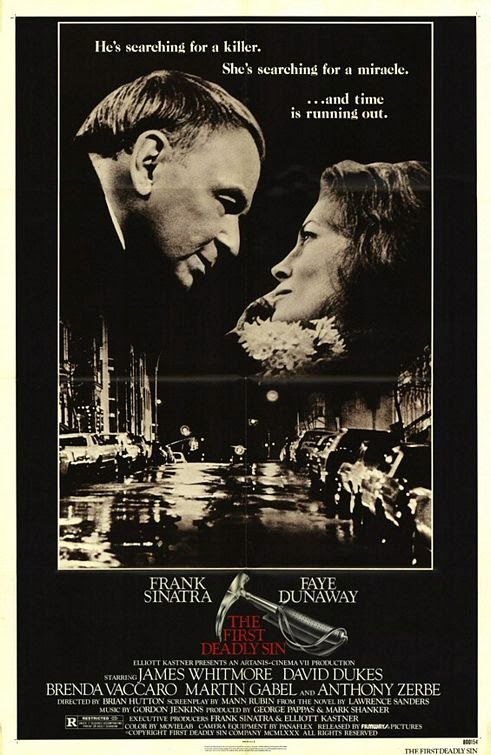 Ha ha, hello all you trilbies, it’s Burl here! I’m presenting to you today a review of a Frank Sinatra picture – his last major acting role, in fact, and his last altogether if you choose to forget Cannonball Run II and that episode of Magnum!
The movie’s called The First Deadly Sin, and it’s as close as we’ll ever get to a Frank Sinatra slasher picture! Apparently Roman Polanski was supposed to direct it, but he had a few legal and ethical problems and had to flee America! So the job was given to the natural alternate, the plumber-to-be Brian G. Hutton, who had made some war pictures in the 1960s and, as an actor, had one of the starring roles in Carnival Rock! Ha ha!
Anyway, Ol’ Blue Eyes stars as a New York City police detective nearing retirement, and he gets the idea that a crazyman is murdering people across the five boroughs with a pointy hammer! Ha ha, in a refreshing twist, the killer appears to be targeting middle-aged men rather than ladies! It’s kind of nice to not have to watch a bunch of ladies get the chop for once, I have to say!
But nobody believes Frank, least of all his mean old boss, Anthony “The Dead Zone” Zerbe! He gathers around him a small cohort of allies nonetheless: wry coroner James “Them!” Whitmore; an eccentric armories curator delightfully played (in his final performance) by Martin “Marnie” Gabel; and the wife of one of the victims, played by husky-voiced Brenda “Death Weekend” Vaccaro! This little community is one of the picture’s small pleasures!
And it’s something The Chairman of the Board needs, because otherwise he’d be pretty lonely! His wife, Faye Dunaway, who is of course known for her roles in The Towering Inferno and The Eyes of Laura Mars, is terribly ill, and in the hospital having operations! The situation is clearly dire, because not once through the entire picture does Ms. Dunaway ever get out of her hospital bed! And through it all The Voice must continue his pursuit of the man responsible for this reign of brutal bonkings!
The investigation leads Frank to a building at which Joe “Maniac” Spinell is the doorman! Ah ha, I thought, because the movie was already reminding me of Too Scared To Scream, another New York slasher/procedural, which as you’ll recall had a doorman suspected as its killer! But no, the hammer-killer here is played by David “Rawhead Rex” Dukes, and he’s a looneytune who likes to sit in his bath and blubber when he’s not out killing! (His scenes made me start thinking of Fear City for some reason, though he carries no nun-chak-as!)
Well, I was sort of expecting a boring movie when I put this on, and it’s true, you can’t call it lightning-paced! It’s lacking much of the style Polanski would have brought to it, or maybe Brian DePalma or someone like that (though it does have the same fog filters that were used in Dressed to Kill), and there’s an uncinematic flatness to the whole thing! On the other hand, Sinatra gives a notably excellent performance, and it has plenty of fine actors lurking in the margins – aside from those mentioned, we even see Bruce “Die Hard” Willis in his first ever appearance, as a man simply walking through a door!
It’s also reasonably affecting, and it has a thoroughgoing New Yorkiness that’s a treasure to watch nowadays! It’s a Christmas picture, so if you’re like me and prefer to watch your Christmas pictures around Christmas, beware! But I’m glad I watched it now anyway, because as unexciting and dour as it was, I enjoyed it! I’m going to give The First Deadly Sin two and a half Honeybunch books!
Posted by Burl at 21:38