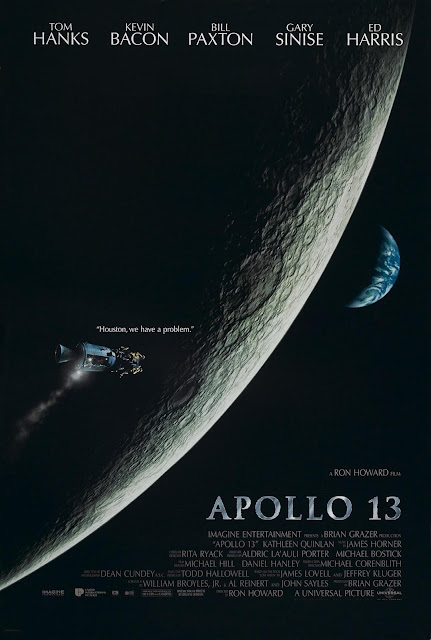 Blast off it’s me, Burl! Ha ha, I’m here to review a movie of rocketmen, and I have to say that it’s a picture I’ve always held in fond regard! I’m not much for the rah-rah Americana - ha ha, I’m not even American! - so that this picture avoids all the obvious touchstones, like the snapping flags that, say, Peter Berg or Michael Bay would have added had they told this story, makes me like it all the more! Oh, I just shuddered at the thought of Berg, Bay or some like-minded simp making this instead of Opie “The Paper” Cunningham!
And if Opie Cunningham were here, I would clap him on the back and tell him he did a fine job with this tale of accidents in space! In fact it’s my second-favourite of his pictures, right after Grand Theft Auto! He’s always been one of those craftsmanlike directors, but he’s got his high points and low points like anyone else! Rush, for example, was pretty good, and Cocoon and Backdraft both have their moments! Gung Ho, on the other hand, is an unfunny anti-union jackanapes, and those DaVinci Code pictures are crazy nonsense! Yes, the more I think about it, the more I realize Apollo 13 is streets ahead of most of Opie’s work, and that’s even before I recall that Roger Corman has a cameo in it, playing a senator, ha ha!
Of course we all know the true-life story! Three astronauts bound for the moon have their plans changed when an electrical blauchup plays havoc with their spaceship! The commander of the mission, Jim Lovell is played by the imperturbable Tom Hanks, whom we all know best from Dragnet; pilot Jack Swigert is portrayed by Kevin Bacon, famed from his appearance in Friday the 13th; and third guy Fred Haise is brought to life by the sadly late, but always great, Bill Paxton, beloved for his appearances in movies as diverse as Mortuary and Streets of Fire! All of these actors acquit themselves marvelously from the opening bar-b-que scenes (there has to be a bar-b-que scene in these astronaut movies, ha ha!) through the space crisis and right up to splashdown!
The scenes in Mission Control are excellent too - some of the best moments involve these gentlemen (and they were all men back then) solving problems and doing math! Ed Harris, who’d been to space himself in The Right Stuff, but who’s best known for his roles in eccentric productions like Knightriders, Creepshow, and Walker, rules the roost down in Houston, but he has able support from the likes of Clint “Ticks” Howard and Gary Sinise, who would get a chance to attend a bar-b-que before going to space in Mission to Mars! Kathleen Quinlan from Wild Thing helps ensure that the family scenes are not a drag, as they could easily have been in a story like this! It helps that the editors ably keep things bouncing around from the ship to Mission Control to the home front so that you never get tired of any one group, location, or situation!
Well, it’s a solid middlebrow Hollywood picture, and that can hardly be denied! It doesn’t juice up the action or overplay the drama or invent bad guys or try to lay blame! It looks good thanks to the portly cinematographer, Dean Cundey, and it projects an air of absolute plausibility! And the moment where Lovell’s young son (played by Miko Hughes, who was Gage in Pet Sematary) asks “Was it the door?” always makes me momentarily misty for some reason! Good work, Ron Howard, ha ha! I give Apollo 13 three steely-eyed missile men!
Posted by Burl at 10:28