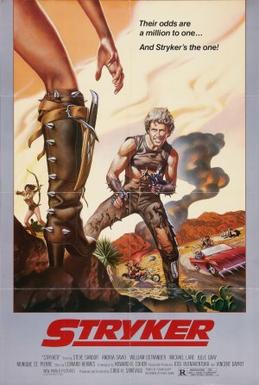 From out on the wasteland it’s Burl, here with a review of one of the many Road Warrior rip-off pictures of the early 1980s! Ha ha, most of those were Italian, like Warriors of the Wasteland, Warrior of the Lost World and Warriors of the Year 3000, but some came from other lands! New Zealand gave us Battletruck after all, and from the Philippines came today’s picture, Stryker!
Ha ha, of course it’s a direct and shameless hatchling from Mad Max 2, aka The Road Warrior, but in some ways it predates Mad Max: Fury Road! In The Road Warrior the precious fluid was oil, and here, more sensibly, it’s all about water! For after the global destruction and the environmental catastrophes, it’s a world of thirst, and even though nobody ever looks particularly parched, they’re all fighting about the H20!
There are several different groups on the trail of a mysterious and bountiful spring, with a lone wolf in a fine fastback Mustang sort of noncommittally along for the ride! This of course is Stryker himself, a beefsman played by Steve Sandor from The Ninth Configuration! Along comes another lone wolf, the simian Bandit, played by William Ostrander from Christine, who joins up with Stryker so they can be lone wolfs together! They rescue Andrea Savio from House of Death, who represents the group who already live at the spring, and who is being pursued by the baddest of the gangs, which is led by a devil-bearded headbald called Kardis, played by Mike Lane from A Name For Evil! And there’s also a gang of ladies, featuring such familiar faces as Monique St. Pierre from Motel Hell and Julie Grey from Gimme an F, and of course a group of midget monks who make pipsqueak noises and turn out to be a good bunch to have on your side!
There’s a little bit of road warrioring, but lots of gunfights too! As in the Italian variants there are some chunky gore effects scattered here and there, but not too many of these really! Still, the few that we get certainly help add that necessary pep, but good car chases certainly would have, too! Almost every major character seems to need rescuing at least once, ha ha, and there’s a scene where somebody pees on somebody else’s head; and in a world without water you wonder whether that’s an insult or a favour!
It was directed by that stalwart Cirio H. Santiago, who brought us all sorts of pictures, from T.N.T. Jackson to Cover Girl Models to Vampire Hookers to Final Mission! He does a fine job with the material he’s got, and who could deny that! Sandor is a bit of a cummerbund as the hero, and of course it’s all very silly, especially the monks, but it’s energetic and mildly compelling nonsense! And I was glad the cars didn’t have that whining noise you hear so often in the Italian ones! Ha ha! I give Stryker two leather diapers!