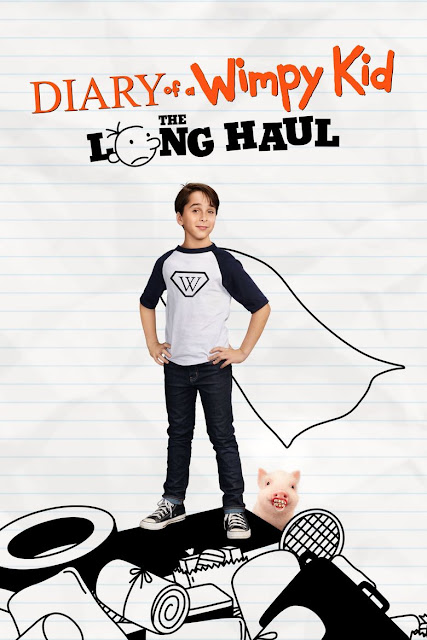 Ha ha and kidstuff, it’s Burl, here to review the fourth entry in a franchise I’ve barely seen the first of! Yes, it’s Diary of a Wimpy Kid: The Long Haul, which is based on one of what seems like a million-book series which my son is currently enamored of!
Now, you’re going to have to bear with me, because I haven’t read the books myself, nor seen the previous movies! What I do know is this: they made three pictures in rapid succession, all featuring the same cast; but then the kids aged out of their parts and now, several years after the initial trilogy, a new cast of kids has been chosen to take up the story!
And what is the story? It’s the misadventures of a family called the Heffleys, and our hero is twelve year-old Greg! He’s got an older brother who seems like sort of a jerk, but a fairly hapless one; a younger brother, whose primary function is to make a mess, and later, to speak Spanish; and a standard-issue pair of parents, here played by Alicia Silverstone and Tom Everett-Scott!
After an unfortunate event in a kiddie restaurant in which Greg becomes a viral star known as Diaper Hands, the family embarks on a road trip which follows in many ways the template set by the original Vacation! Ha ha, along the way Greg makes an enemy of a family headed by the gas station attendant from that new Friday the 13th picture, and this culminates in a scene which scrupulously recreates the shower scene in Psycho - which, as you’ll remember, is also parodied in the old National Lampoon picture!
Many things go wrong, of course: there are car troubles, a baby pig, lots of screaming and yelling and dangerous driving, and much talk about restricting device use and screen time, which, if that’s your idea of an entertaining family comedy, you will enjoy a great deal of here! Against all the odds the family makes it to some old grandma’s birthday party, nobody is killed or runs off with the circus! Ha ha!
It’s fast-paced I suppose, and they fully commit to the Psycho bit, but there’s not a lot else to recommend this movie! I suspect the earlier ones are a lot better, quite frankly, and I guess I’ll be finding out for myself one of these days! At least, I’m sure they’ll seem better in comparison, so maybe it was good to start with the last movie first! I’m going to give Diary of a Wimpy Kid: The Long Haul one and a half gruesome, toothy pacifiers!
Posted by Burl at 10:55