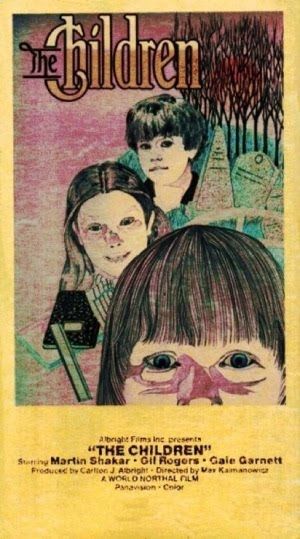 Ha ha and rug rats, it’s Burl, here to review a movie about scary kids! You know, there’s a lot of talk about that Spanish picture from the 1970s, Who Can Kill A Child?, a lot of chatter about how taboo-flaunting it was, and that’s true! But the picture I’m discussing today, The Children, seems to me just as outrageous, though of course it came along a few years later and is not nearly as well made, so I guess that’s why people don’t give it as much credit for its transgressions!
The picture begins with a pair of lazy nuclear plant inspectors shirking their duties and going to hoist a couple of cold ones instead! Soon a yellow cloud of radioactive gas is traveling the countryside, leaving unaffected the adults who travel through it, but when a schoolbus full of kids drives through the fog, they become black-fingernailed zombies with the power to frizzle-fry anyone they touch! Soon they’re wandering the countryside delivering killer hugs to their parents and any other adults unlucky enough to encounter them!
On their trail is Sheriff Billy, played by Gil Rogers of Eddie Macon’s Run, and John, the father of one of the kids! Ha ha, John looks a bit like Jason Miller, and his wife, who is very pregnant in the movie, is played by none other than Gale Garnett! You might be familiar with her from the band Gale Garnett & the Gentle Reign, or maybe from her strange little folk song about a prism, which is how I myself got to know her work! Anyway, I had no idea she acted, and it sure was a surprise to see her in this movie! But it’s a real shame what happens to her family in the picture! Terribly sad, in fact, and I almost had to turn the movie off!
For you see, I’d watched this movie before, but the last time was long before I became a father myself! Needless to say, it has a different impact now, and the scene with the little boy in his bedroom is very hard to watch! But I persevered, knowing it was all a fiction, and that the goopy burn makeup might have been as hard to wash off as it looked to be, but it was still only makeup! When they realize the only way to stop the kids is to chop off their hands, it gets even more gruesome for the kidlets, and by the end we even see one little girl get completely chopped into cordwood, Friday the 13th part V-style! (And speaking of Friday the 13th, the score for this one will sound very familiar if you’ve ever seen one of those Jason Voorhees pictures!)
There are plenty of fry-ups in the movie, enough so that it gets to be a bit repetitive! Two idiot slapheads, one of whom is played by Peter Maloney from The Thing (he’s Bennings, ha ha!) help the sheriff out at one point, but strangely we never see these two particularly deserving specimens get the atomic hug! I guess just because we don’t see it doesn’t mean it didn’t happen, ha ha! And whatever happened to that weirdo in the limousine? And what about Miss Button?
It’s an okay little rural horror picture: goofy, to be sure, but grim as well; crudely done, but spiced with effective moments, like the death of the old shopkeeper lady! It could have used a bit more pep and a little more profundity in its approach, but I’ll give The Children one and a half Superman posters!
Posted by Burl at 22:51