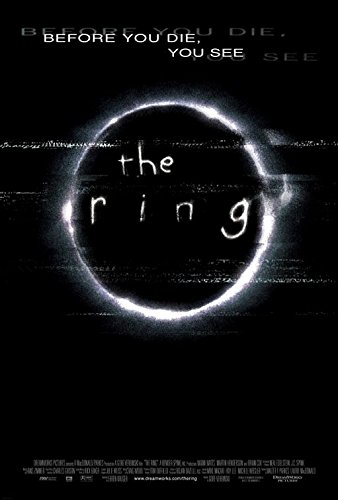 Approaching through your TV screen, it’s Burl, here to review a solid modern scarepic, namely the American remake of The Ring! Yes, I saw this one in the movie theatre, and never mind that it doesn’t make a lot of logical sense: it worked on me to great effect!
It was distinctly less effective this time around, which is to be expected, and is not really a reflection on the movie, ha ha! I still thought it was pretty well crafted, even if it’s even more out of date than other technology-based spookshows tend to become seventeen years on! The villain here, or the villain’s delivery system, is of course a VHS tape, and this was a superannuated medium even in 2002; and the movie is filled with answering machines and physical file folders and all manner of 20th century information and communications ephemera! Ha ha! (Of course, I have a basement full of VHS tapes, so it can still be pretty spooky to me!)
We all know the plot, but here it is again! Some unlucky teens run afoul of a possessed VHS, which carries what appears to be a lost collaboration between Luis Bunuel and Maya Deren and a sophomore film student in a Withnail scarf; and after a scary opening sequence we meet an intrepid reporter played by Naomi Watts, well known from her appearance in The Shook-Up Shopping Cart excerpt seen in Matinee! She has a young son, and recruits the help of his photographer father to investigate the increasingly scary mystery of the tape! Ha ha, the trail leads her from damp Seattle to an even damper island, where she meets grumpy Brian Cox, well known from Manhunter and Rushmore!
After a complicated electrocution and some horse-based horror, things come to a head at the bottom of a well, and then there’s another scary scene! It’s all done fairly well, even if it doesn’t actually make any sense! Ha ha, there’s a real division between horror in the West and that which comes from regions of the world that are more connected with their own tapestries of myth and legend! “Sense” is not a particularly valued commodity in terror tales originating in the East! (The Ring is of course based on a Japanese novel and movie adaptation!) And this is as it should be: horror is an emotional genre, not so much a logical one! Anyway, many Western tales make no sense either, but they often try to pretend they do!
The bottom line is that this one works every bit as well as its Japanese forbear did! The picture was photographed in cool blue and rainy grey tones by Bojan “Pumpkinhead” Bozelli, and directed by some Hollywood slickster who, they say, used to be a punkrocker, like ol’ Burl! Ha ha, bet you didn’t know that about ol’ Burl, but yes, I used to punkrock with the best of them! But while this ex-punkrocker director is no Alex Cox, I still say he did a good job with this effort! It’s got some Special Makeup Effects from no less than Rick Baker, and the trick effects in general are superb! The Ring is a good movie to re-watch around Halloweentime with your sweetie, and I give it three clumsy horses!
Posted by Burl at 12:56

Email ThisBlogThis!Share to TwitterShare to FacebookShare to Pinterest
Labels: 21st century, ghost, horror, saw it on a date, saw it on the big screen, supernatural