Hi! Burl here to review a mystery, and the biggest mystery with this one, ha ha, is why did they bother! Well, maybe that’s a bit harsh, because mysteries like this picture were a dime a dozen in the mid- and later-80s; but still, when I think back on this picture, only a few days after having seen it, I can barely remember a thing about it!
I remember the title, though, bland as it is: The Bedroom Window! The story hinges on a premise I found fairly unbelievable: that international glamourlady Isabelle Huppert would take up with the guy from Police Academy! Yes, Ms. Huppert’s character, a cool Gallic sophisticate, is having an affair with an uber-goober called Terry, played by Steve Guttenberg, who is of course so well-known from his role in The Chicken Chronicles! One evening, while Terry is post-coitally micturating, Miss Huppert hears a strange noise! Outside the window she spies a red-headed stranger putting a brutal grabbing on a young lady, and though this attack is interrupted, our illicit lovers later learn that a second lady was victimized nearby only a short time later – victimized to death!
Thus, the conundrum: how can Miss Huppert, who is married to Terry’s boss, come clean about what she saw? Ha ha, she can’t, or so she says; therefore Terry, who truly seems like the stupidest man on the face of the earth, must pretend he was the witness, even if he was actually micturating at the time! Quickly things turn poorly for Terry: a pair of cops, one played by John Parker himself, Carl Lumbly, the other by Frederick “Hard To Kill” Coffin, begin asking too many questions! His boss – also his inamorata’s husband, don’t forget – gives him the hairy eyeball at every opportunity! And when the case goes to trial, Wallace Shawn, in the same year he did The Moderns and The Princess Bride, appears as the unusually effective defense attorney who exposes Terry as a poor-eye who couldn’t possibly have seen the alleged crime occur! Ha ha, Terry, you nearsighted dumbbell, you’re now suspect numero uno! 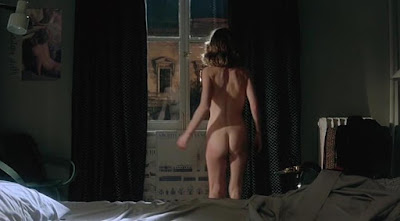 Brad Greenquist, a hulking ginger you might have seen in Pet Sematary or The Chair, essays the role of the creepy killer, and he isn’t pleased with Terry’s shenanigans! Neither is the boss, who's played by Paul “Best Seller” Shenar, and surely should have been played by someone who looks less precisely like the sort of character he’s supposed to be! (In fact, why not have him played by Wallace Shawn, in a tribute to Shawn’s appearance in Manhattan?) Meanwhile, Maury Chaykin from Harry & Son and Wild Thing appears as the greasiest pool player ever! Ha ha!
Elizabeth McGovern is an actress who has had an interesting career, popping up in movies like Once Upon A Time in America, Ragtime and She’s Having A Baby; she's the initial victim of the raging redhead, with whom Terry teams up for a particularly dumb denouement! It’s all supposed to be oh-so-Hitchcockian, but, apart from a moment here or there, nothing approaches the grandmaster’s level! Anyway, Hitchcock’s Wrong Men are victims of circumstance, not of their own base stupidity!
It’s easy to see why Brian DePalma, whom I’m certain was approached, turned this one down, though it would have been interesting to see what he might have done with it! Ha ha, the scene at the ballet, which is meant to be a major suspense setpiece, but falls confoundingly flat, might have had some oomph! He’d probably have kept the characters pretty dumb though – ha ha, just look at Body Double!
Terry’s every action is painfully idiotic: until he manages to do one thing at the end that provides the killer with a temporary inconvenience! Thus the picture comes to an end, and not a moment too soon! It’s no wonder that in the years since, any memory of this movie has been buried beneath the reputations of only marginally more successful 80s suspensers like Black Widow, Jagged Edge, Someone To Watch Over Me and the like! I give The Bedroom Window one snapped-off toothpick!
Posted by Burl at 22:54