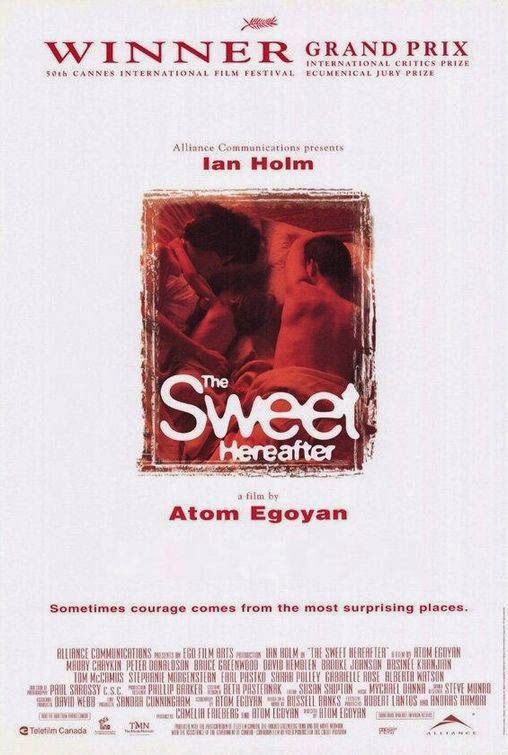 A pleasant day to you, it’s Burl! Ha ha, I’m here today to palaver with you about yet another Canadian film from north of the 49th! The movie’s called The Sweet Hereafter, and to many it represents a high point, perhaps the high point, in Atom Egoyan’s career!
Not to me, though! I prefer plenty of Egoyan films to this one, and all of them came earlier! Regardless, this is a pretty solid picture, though now to me, later in life, in some ways more affecting than previously! On a purely cinematic level though, less so, ha ha!
The story is told a-chronologically, though to me, watching it for a second time, the timeline was pretty straightforward! (I saw the movie recently in the company of elderly first-time viewers, and ha ha, their reaction was one of utter bewilderment!) We meet a lawyer, Mitchell Stevens, played by the very grand Ian Holm (who should probably be knighted or something, and could be, as far as I’m concerned, for Alien alone!), who swoops into a town that’s just undergone an unspeakable tragedy involving a school bus, trying to organize the victims’ parents into a class action suit!
The picture bounces around with the townspeople, sometimes in the company of Stevens, sometimes not; sometimes pre-tragedy, mostly afterwards! There are a lot of very sad people in the movie, and no wonder! They’re a complicated bunch too, and as with all small town portrait pictures, some pretty grim secrets are revealed! But on the whole, the big scenes you would expect to find with a setup like this are largely avoided, for which we should be grateful, and the closest the picture comes to the sort of thing any other director would have copiously included is the scene in which Bruce Greenwood, of The Malibu Bikini Shop, threatens to beat Holm bloody!
Other townsfolk include young Sarah Polley, whom we know from Blue Monkey, and whose character harbors the biggest, almost most unlikely secret of all; Alberta Watson, famed from The Keep, and who here indeed “keeps” a motel; Earl Pastko of Heads, who plays a bearded hippie; and of course Maury Chaykin from Wild Thing, who thinks he knows everything about the town, but hasn’t got a clue what’s happening beneath his very nose, ha ha! And then there’s Gabrielle "Timecop" Rose as the bus driver, who I think gave one of the very best performances in the picture! She also gives its biggest, and only, laugh line: “You heard what Abbott said!” Ha ha!
While there are some aspects of the picture that feel stilted, or that try too hard in a self-consciously understated way, or that seem unintentionally parochial, the bus crash itself is handled masterfully! Technically the picture is excellent, and ultimately Egoyan’s policy of low-key understatement is the right one, even if it invites some nearly cartoonish “90s indie film” moments!
It’s got really fine performances, a clever construction and a miasma of sadness you’ll find difficult to shake off, and all of that adds up to a picture you may not wish to see twice, but will be appreciative if you do! I’m going to give The Sweet Hereafter three stenographer’s cones!
Posted by Burl at 22:27