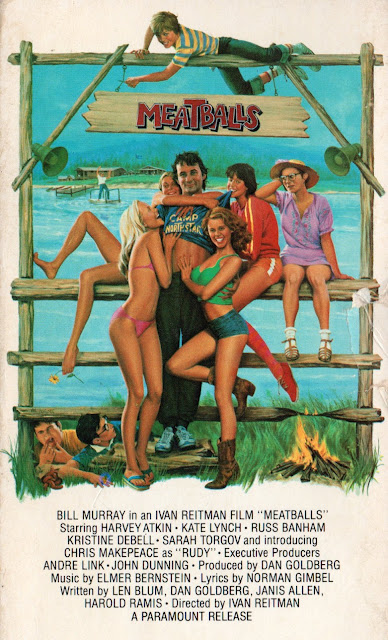 Boy, I don’t know how many times I’ve seen this one, because oh Killarney was it ever on TV a lot when I was growing up! And in the last couple of years it’s become a sort of early-summer ritual movie for me, and I try to watch it sometime in June if I can! I managed it again this year, so I thought I’d give you a little review of this summer camp classic!

Yes, summer camp movies are another favourite microgenre of mine! Sometimes there’s a killer involved, of course, and sometimes there isn’t, but they’re all remarkably similar to one another either way! Meatballs, for example, feels like it could turn into The Burning or Madman or Friday the 13th part 2 at any moment; and other summer camp pictures, like Party Camp or Indian Summer or Chuck Vincent’s Summer Camp, feel like they should! Ha ha, a maniac would do those characters some good just where they need it the most! On the other hand, the summer camp slasher films usually have a half-hour stretch or so in which they might as well be summer camp comedies – someone should cut together the non-horror parts of all these movies and you might get a pretty good camp comedy-romance anthology picture out of it!

Anyway, Meatballs! Yes, it was Bill Murray’s first major motion picture appearance, and yes he’s manic and unkempt and sometimes funny in his role as the Head Activities Director of Camp North Star, Tripper Harrison! He’s also strangely aggressive (that’s 70s and 80s comedy for you!) and has an oddly close relationship, scored to sap-dripping strings, with a waifish young camper played by Chris Makepeace! In the meantime he’s hot on the trail of an alternately huffy and bemused lesbian councilor, and spends a lot of time making announcements on his P.A. system like it was M*A*S*H or something!

We get a series of other small stories too, like the tender relationship between the tubby trencherman Fink and his best pal Spaz, as well as the kidnapping-based relationship between Crockett and Candace! And of course there are the travails of Morty, the head of the camp – ha ha, he’s played by none other than Harvey Atkin from Funeral Home! – and the brutal rivalry between slobby Camp North Star and snobby Camp Mohawk across the lake! We get a good sense of that early in the picture when some Mohawk ruffians dump Spaz’s K-Mart milkshake all over his head! There are other subplots too, but sadly we never get any closure on the story involving the little boy and his pet frog, Harry the Jumper! And by the way, why the heck is it called Meatballs, anyway?

Because in the end it’s just a summer camp picture, and I like those! I never went to summer camp myself so maybe that’s why! There always seems to be such a strange camaraderie between the campers who returned year after year and eventually became councilors-in-training and ultimately councilors themselves! That appeals to me for some reason! And this movie also contains some great advice on folding shirts, which I still use to this day and will pass on to my own son!

Ha ha, for its sweet campedness and summery Southern Ontario atmosphere, I give Meatballs two and a half fold sleevies! And I leave you with this bit of doggerel, apparently composed by the actor who played Crockett!

We are the C.I.T.s, so pity us!
The kids are brats, the food is hideous!
We like to smoke and drink and fool around
We are the North Star C.I.T.s!
Posted by Burl at 12:36