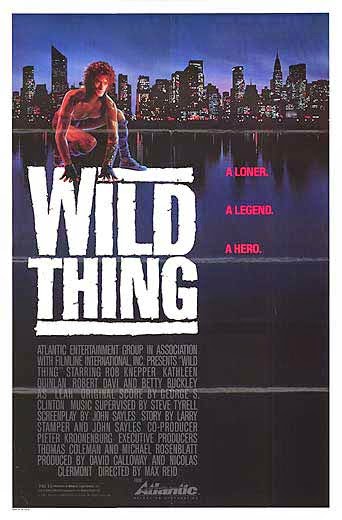 Ohhh-eee-ohh-eee-ohhh, it’s Burl! Ha ha, that was my approximation of a Tarzan yell, because today I’m talking about a picture called Wild Thing which fancies itself more or less an urban Tarzan picture! Instead of the jungle, our Wild Thing dwells in a dilapidated ghetto known as The Zone; instead of poachers his enemies are drug dealers; for a Jane he’s got a social worker (named Jane, natch!); and instead of Cheetah he’s got an old crazylady for a pal!
You can pretty well guess the whole plot from what I’ve told you already, but for the sake of fully discharging my duty, I’ll give you a bit more! Ha ha, it seems that a hippie family picks up the wrong hitchhiker one day as they’re cruising into the (unnamed) big city, and events lead to the gunfire slaughter of the parents, while their little child escapes into the urban wilderness! As fortune would have it, the little boy is found by a demented baglady, who teaches him the ways of the streets and about her own personal socio-cultural philosophies involving Bluecoats and The Company! Eventually the Wild Thing becomes a do-gooding core-area legend with blowdried hair, played by Rob Knepper from D.O.A.,and he of course does a revenge battle against the crooked cop and drugs lord who orphaned him so many years ago!
The Zone is the sort of ghetto populated by loveable eccentrics who pull together when the going gets tough – it’s a lot like the neighbourhood in The Annihilators that way! Kathleen Quinlan from Twilight Zone: The Movie wanders through all of this as the curiously detached social worker/love interest, and the rest of the cast includes the stalwart bonehead Robert Davi, from Action Jackson and Peacemaker, as the drugs lord (whom the Wild Thing eventually sends howling down some kind of shaft); Maury Chaykin from The Sweet Hereafter doing a good job as the crooked cop who finds his conscience just a little too late; Betty Buckley from Carrie and Frantic as the gooney-goo-goo baglady; and future Hollywood filmdirectors Shawn Levy (from Zombie Nightmare) and Clark Johnson (from Drop Zone) as, respectively, a local teen and a do-gooding flatfoot! Theo Caesar from Enemy Territory, a picture this one somewhat resembles, appears as a good-hearted street punk!
One of the problems with Wild Thing is that, somewhere along the line, they foolishly made the decision to go PG-13! It’s not that I’m such a great lover of movie violence, but this should have been a little grittier, I think, and higher-impact violence would have suited it! You can see the cuts too, which is always irritating, particularly in one scene where the Wild Thing uses an umbrella trap to transfix and suspend one of the baddies, and another scene where a nasty drug dealer is run through by street bums, who have mobilized themselves into a very Prince of Darkness-style impalement gang, but this time working for the forces of good!
The most perplexing thing about this picture is that it was written by none other than John Sayles, who was evidently in his genre mode at the time, as when he wrote Piranha and Alligator! But this picture mostly lacks the cleverness of those minor classics – the scenes between Wild Thing and Jane are especially clumsy, as she magically divines his life story from little more than a few grunts and gestures! The script (and the acting, and the directing) never manage to overcome the massive silliness of having a character named “Wild Thing,” whom other people on the screen are actually required to refer to out loud as “Wild Thing!” Ha ha, it’s pretty poxy!
Silliness and all, it does feel as though it might have been a pretty neat little genre picture, if only they hadn’t gone wrong with almost every decision they made! The action scenes are not very exciting either! It’s peppered, very lightly mind, with nice moments and a few good performances, but more than anything it seems a job poorly done! And yes, they use the Troggs song, but not nearly as well as they might have! I’m forced to give Wild Thing a measly one pneumatic dartgun!
Posted by Burl at 21:55