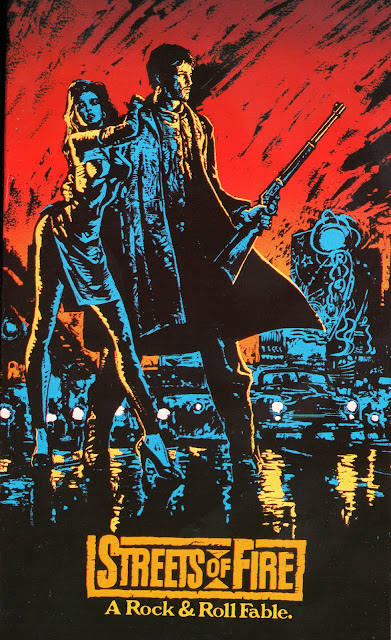 Burl talkin’! It’s time to have a look at a crazy cult classic that I finally caught up with: Streets of Fire! This is in some ways the action genre’s One From the Heart, namely an expensive, highly stylized, colour-saturated, music-filled, weakly-plotted, hermetically-sealed, labour of love super-flopperoo! Ha ha, nobody went to see it when it came out in the summer of 1984, and it’s no wonder Walter Hill had to move on from this picture to a bland would-be crowdpleaser like Brewster’s Millions!
But Streets of Fire is by far the more interesting movie! Ha ha, it claims off the hop to be “A Rock n’ Roll Fable,” and I guess that’s as good a description of it as anything! It takes place in a neon netherworld where people listen to a weird hybrid of 80s and 50s rock music and wear poodle skirts and grease their hair back! The action begins when a superstar lady warbler is kidnapped right off the stage by a loutish group of bikers, led by Willem Dafoe, who sports a truly astonishing pair of garbage pants!
So of course Michael Paré, the songstress’s ex-boyfriend, is called in to solve the problem! He's tough and cool, but also tends to pout like an eight year old much of the time! With the help of a tough-talking lesb*an and a doo-wop group, as well as a perpetually angry glasses nerd played by Rick Moranis, Paré fights Willem and his gang until, naturally, the whole affair comes down to a mano-a-mano sledgehammer fight! Ha ha, that’s how these things always end up, isn’t that true!
In the background, Rick Moranis, dressed like a 1950s nerd, hops around spewing venom! I guess he’s supposed to be overcompensating for his nerdly insecurities, and in the process, he actually becomes just about the most well-rounded character in the entire movie! The other most interesting character is Amy Madigan, who plays some sort of soldier lady who just won’t fall for Michael Paré’s charms! He’s a real pretty boy, so most of the other ladies in the movie, except his sister, consider him pure catnip!
It’s an interesting experiment of a movie, and I guess was closer to the comic-book craziness that Hill had envisaged for The Warriors! But the story is really weak tea, and the narrative, such as it is, essentially comes to a close halfway through! I know the thing’s supposed to be a fable, with the characters being types and nothing more, but in the end, dramatically speaking, it just doesn’t satisfy!
But it satisfies in a whole lot of other ways! The movie looks great, the music’s not too bad – it’s no Phantom of the Paradise, but it’s still much better than most movies where a character is supposed to be a great rock star – and the whole enterprise just feels slightly crazed and out of control! And, ha ha, I surely do like that in a movie! This is one of those grand, soaring cinematic Icari that books such as Mr. Rabin’s My Year Of Flops mean to celebrate, and if Mr. Rabin hasn’t covered this movie, he sure should consider it!
I give Streets of Fire three broken down tour busses!
Posted by Burl at 22:10