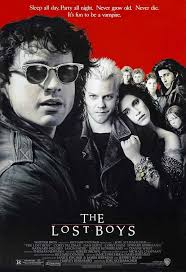 Ha ha and hemogobblers, it’s Burl, here to review a goofy movie about cool vampires! Yes, of course I’m talking about The Lost Boys, which many consider one of the key vampire pictures of the 1980s, alongside Fright Night, Near Dark, and to a lesser extent, Vamp!
But as silly or juvenile as those movies can occasionally be, they at least seem more or less made for adults, whereas The Lost Boys, its R rating aside, is, to me, a close cousin to The Goonies or something like that! Frankly, even back when I went to the theater to see the movie in the summer of ’87, having been primed by the exciting-looking stills in Fangoria magazine, I didn’t care much for it!
Watching it again as a putative adult, it’s still neither a good vampire movie nor an effectively scary movie, nor a terribly good movie at all! It has an entertaining, empty slickness to it though, and some good-looking photography from, of all people, Michael Chapman; and the horror end is held up somewhat by some nice makeup trick effects from Greg Cannom (who does the same vampire cheekbone and eyebone makeups he did in Vamp)! There’s even a little bit of gore, though would-be treats like the exploding head are cut away from very quickly and subsumed in showers of sparks while they’re happening! But this is one of those pictures that can be handily summed up in a single image, and that image is of an oiled-up shirtless guy playing the saxophone on a beach!
Aside from that guy, the cast has some ringers! Dianne Weist from It’s My Turn plays the single mom forced by circumstance to move herself and her two sons to the town of Santa Carla, “murder capital of the world,” where her eccentric dad, Barnard Hughes, dwells in a large folk-art cabin! Jason “Keyhole” Patric, going full mannequin, plays the older brother who first comes into conflict with, then is seduced into joining, the local vampire club! Jami Gertz is the token lady in the gang, and there’s a kid too, but the potential of a vampire kid, a bitter and ageless being in a child’s body, so compelling and horrifically realized in Near Dark, is completely ignored here! Kiefer Sutherland, playing just about the same character he did in Stand By Me: that is, a bully with pretensions to suavity, runs the club, and they like to race dirtbikes, hang from bridges, and generally fly around putting a biting on the good people of Santa Carla!
Of course the two Coreys are present and accounted for: Haim from Watchers, and Feldman from Friday the 13th part 4! Corey plays the younger brother, while Corey of course plays one of the Frog brothers, a fraternal order of pubescent Van Helsings who know the town is full of vampires and would like nothing better than to vanquish them! And then of course there’s the local video store owner, played by the famous milquetoast from Death Valley, Edward Herrmann, who sports the movie’s most hilarious 80s fashions and who may know more about the bloodsucking than he’s ready to tell!
The vampires, meanwhile, hang out in an old hotel that sunk into a crack or something, where they hang upside down and worship Jim Morrison! They’re a squirrely bunch, and one is pleased when they go down much more easily than most movie vampires do! A few squirts of holy water here, a stake in the heart there, and these frilled-shirt laddies are done like dinner! Ha ha! And there’s a death by stereo too!
When I first heard this movie was being made, I thought the title implied a rich new rethinking of the vampire legend! Ha ha, how wrong I was! It’s a fashion show as much as it is a movie: fun, if you like that sort of thing, but desperately inessential! I give The Lost Boys two garlic T-shirts, and even that feels a bit too generous!
Posted by Burl at 13:16

Email ThisBlogThis!Share to TwitterShare to FacebookShare to Pinterest
Labels: 1980s, beach, horror, saw it on the big screen, vampire