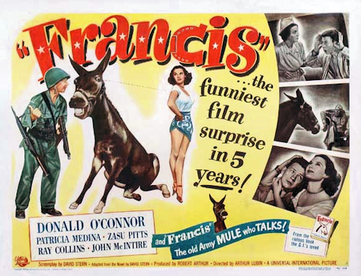 Hee haw, it’s Burl, here to review a movie about the most famous talking mule there is, Francis! Now, fame-wise I’m not sure how he stacks up against Mr. Ed, his greatest competitor, but I’m pretty sure these days, seventy years after his cinematic debut, he’s still better known than Don, the horse that was voiced by John Candy in Hot to Trot!
Of course there was only one Hot to Trot, and there must have been a half-dozen Francis movies! The picture I’m reviewing for you today was the first of them, and while it doesn’t explain how the irascible mule gained the power of speech, it does detail the initial meeting between Francis and the human who would become his closest chum, 2nd lieutenant Peter Stirling, played by the amiable hoofmeister Donald O’Connor! Ha ha!
Now, O’Connor is of course best known for his spectacular work in Singin’ In the Rain, but a little-known fact is that he can also be seen in The Big Fix, palling around with Francis in footage from Francis Joins the Navy! He’s really the perfect guy for this role - halfway between Mickey Rooney (who got his own horse movie later, The Black Stallion) and Eddie Bracken! Of course Rooney and Bracken were both fine comedians capable of playing exactly the sort of gormless milquetoast Stirling is meant to be, but somehow O’Connor hits those notes while still projecting a sort of protean competence that leads you to believe he actually might have risen to the rank of Lieutenant during wartime without being either fragged or simply killed in combat! Even Don Knotts couldn’t have pulled that one off!
We first meet Stirling in his post-war occupation as a bank teller, but there is a whisper campaign being conducted against him, and his boss threatens to fire him! The boss gives Stirling a chance to tell his tale, which occurred when he was stationed in Burma during the war! On getting separated from his patrol, and under heavy enemy fire, Stirling comes across a placid army mule who gives him advice on how to survive, and then, when Stirling receives a minor shrapnel wound to the leg, carts him to an aid station!
From there the picture adopts a structure of repetition, in which Stirling tries to persuade his colonel that a talking mule saved his life; Francis refuses to talk to the colonel; Stirling is thrown into the psychiatric ward and made to weave baskets by jolly nurse Zasu Pitts; Francis gives Stirling some crucial bit of information about a Japanese observation post, or a hidden patrol, or a sneak air attack; Stirling becomes a hero but is pressured to tell the colonel where he got his information; rinse and repeat! Ha ha, with its host of eccentric characters, its focus on the impenetrable logic of rear-echelon army brass, its dazed hero caught in the machinations of illogic imposed by war, it almost reminded me of Catch-22! Eventually, Francis, to prevent his new friend being tossed in the booby hatch for life, deigns to talk for someone other than Stirling - a three-star general, in fact , played by John McIntire from Psycho, Cloak &Dagger, and Herbie Rides Again - but it only causes more trouble!
The perpetually irascible Francis speaks in the voice of Chill Wills from Fireball 500, and his attitude is essentially that of the dogfaces in a Bill Mauldin cartoon: grousing about army brass in general, and 2nd lieutenants in particular, for whom he seems to have a particular hate-on! But at the same time he’s a hyper-patriotic equine and wants to do his bit to win the war! Eventually the picture concludes with what seems like a tragic denouement, but director Arthur Lubin (who would later go on to direct a hundred and fifty episodes of Mr. Ed - ha ha, talk about a niche!) and novelist/screenwriter David Stern have one last trick up their sleeves! After all, if Francis died in a plane crash, how could he ever join the WACS? Ha ha!
The picture is done in the Universal low-budget house style, which is a comforting style to ol’ Burl! Those Burmese jungles are probably the same palm fronds later prowled through by the Creature from the Black Lagoon, ha ha! Though there’s a lot of unfortunate talk about “Japs,” and that same casual racism you find in many pictures of the period, particularly war pictures, it wasn’t ladled on quite as heavily as I’d feared! The picture is a bit slow and talky for a children’s comedy, and anyway the intended audience seems more to be men for whom wartime service was still a recent memory, who can chuckle and nod along with Francis’s jabs at army life and the officer class! I give Francis the Talking Mule two tails standing at attention!
Posted by Burl at 22:18