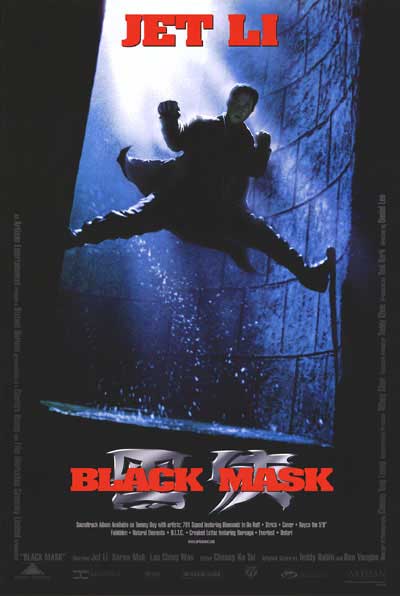 Well chop my socks, it’s Burl, here to review up some all-new nonsense action! Now, I say nonsense action, but doesn’t Black Mask, the movie under review today, really fit into the Ridiculous Action category, I hear you ask? Shouldn’t it be mounted along the Via Appia with its fellows, among them the equally guilty Raw Force and Deadly Prey? Ha ha, no I say, and I say again no! While certainly ridiculous in parts, and not lacking in pep, Black Mask, for better or for worse, lacks that certain extra edge of Total Ridiculousness!
But enough of trying to categorize it! Black Mask is a Jet Li extravaganza featuring Jet as an extraordinarily bifurcated character: at once an inhumanly violent, chemically altered supersoldier unmade and re-created in a lab so as to be free of pain, empathy, and emotion of any kind, while capable of killing enemies by the dozen in a thousand different ways; and a soft-spoken, peace-loving, flower-sniffing librarian who only wants to be left alone! Ha ha! And the split between his dual natures seems to trouble him not a whit!
But his fellow supersoldiers are not so complacent! They feel the urge for revenge upon those who experimented on them, and for this they seem to blame just about everybody! So the drug lords, the cops, random doctors and nurses, and really just anyone who gets in the way are destined to become the victims of the special commando squad! Ha ha, and they come up with some pretty gruesome ways of dispatching their victims, like the heart-bomb, or the acid sprinklers!
There are also plenty of punchfights, of course, and very dynamically enacted and filmed they are too, with lots of funky moves! When I saw this picture in the theater with my friend Pellonpäa, we practically stood up and cheered: the action sequences were extremely effective, and they still hold up well today! They’re cartoonish, but not as extremely so as we find in some Hong Kong action pictures! And they get pretty gory too, which, I’ll admit, always brings an action picture up a notch or two in my esteem! Ha ha, I guess it’s the Fangoria kid in me! (I didn’t care for the gift the commandos send to the drug lord King Kao, however!)
The bulk of the story involves Jet’s character, Michael, trying to stop the evil plans of the supersoldiers and their long-haired, Lennon glasses-wearing leader! In this he’s helped by his friend, the cop with whom he plays chess, and also a lady from the library, a flibbertigibbet type who proves her mettle, but not without screeching a lot!
Well, if you like goofy high-octane action and Jet Li at his fastest and most charming, you’ll probably like this picture! I certainly feel an affection for it! You’ll forget the plot details immediately upon finishing with it, but you’ll have had a good time! I’m going to give Black Mask two and a half exploding drug lords!
Posted by Burl at 16:26