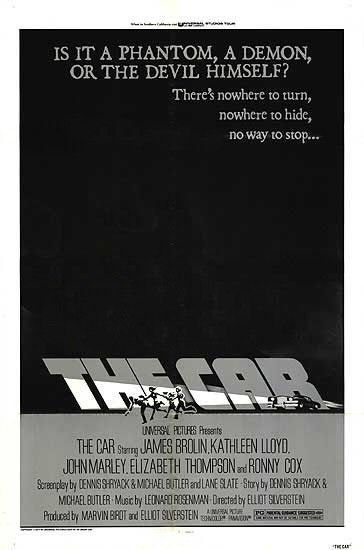 Beep beep, it’s Burl, here to review one of the great concoctive movies of the 1970s, The Car! It’s like someone saw Jaws and The Exorcist, and heard about the then-upcoming Smokey and the Bandit, and said ha ha, let’s do it! Let’s mix ‘em all up and see what we get!
What they got was a picture about a small desert town terrorized by a devil-possessed sedan, a concept which I consider sort of brilliantly stupid! Ha ha! The dastardly auto, a big ugly thing of indeterminate make, roams the mesas and barrancas around Santa Ynez, a little community with a seemingly inexhaustible police force! The hero of the piece is James Brolin, well known from Von Ryan’s Express, looking very Marlboro Man as deputy sheriff Wade Parent! (Boy, Brolin had a great run in the 1970s! Westworld, The Car, Capricorn One, The Amityville Horror: none of them great movies, but all pop gems in their own right!)
The police force also includes alcoholic deputy Luke, played by the fine Ronny Cox from Total Recall and Beverly Hills Cop! The boss sheriff is leathery John Marley, and then there’s my favourite character Chas, another deputy, played by Henry O’Brien! Ha ha, I won’t be breaking a confidence to reveal that one or more of these gentlemen may end up flattened by the car! There’s also a nasty, abusive demolition man played by R.G. Armstrong, who would reunite with Cox five years later to battle The Beast Within, and whose fate in this picture will surprise you! And Wade Parent’s girlfriend is played at once winningly and hammily by Kathleen Lloyd from Best Seller!
The sequence of events is very Jaws, with the car claiming its first victims right off the hop, and then on the reg after that! Unlike the shark, however, the car begins targeting specific people, at one point jumping through a house Grand Theft Auto-style to wheel-butt someone it has a grudge against! Ha ha! The car starts exhibiting supernatural abilities, like going into a barrel roll, crushing a couple of police cars, righting itself and cruising on without so much as a dented fender! It also demonstrates a disinclination to drive on hallowed ground, which apparently cemeteries are! Yet for all this, most of the force refuses to believe they’re dealing with anything but a maniac driver!
Ha ha, the Santa Ynez police force has a rough go of it here, suffering untold personnel losses beneath the wheels of the constantly honking vehicle! But a series of events involving truckloads of dynamite, a motorcycle fleeing from the car, a big cliff, and a dodging out of the way at the last moment (the oldest trick in the book), conspire to lead the car into a fiery explosion supposed by some to contain a demonic face, though I’ve never been able to see it in there!
To my great enjoyment The Car is a desert picture, the sort of thing Jack “Tarantula” Arnold should have been doing in the 70s instead of Black Eye! But director Eliot Silverstein does a fine job in Arnold’s stead, keeping the car as scary and imposing as he can under the circumstances, ha ha, the circumstances being that he’s making a movie about the devil’s towncar! The car design helps: King of the Kustomizers George Barris did a good job here; and there’s some marvelous photography from Gerald Hirschfeld of both the car and its environs!
But the killer car idea, dusted off later for Christine and one segment in the anthology Nightmares, is pretty silly! Points go to all participants for taking it seriously and making it more or less work! The car hardly ever claims victims at night, probably because it was difficult to photograph in the dark; but even with this restriction the movie manages an aridly creepy atmosphere! I’m fond of this picture and I’m not afraid to admit it! I give The Car three French horns!
Posted by Burl at 23:21