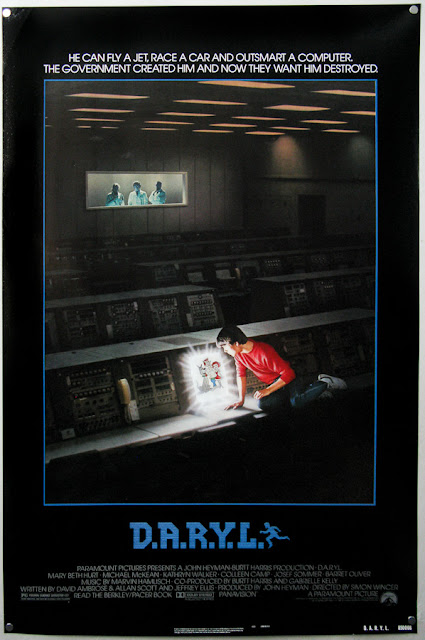 Hi, it’s your good pal B.U.R.L. - Badly Underpaid Reviewer Lad! Ha ha! I’m here to review a kiddie sci-fi picture from the 1980s which you may or may not remember: D.A.R.Y.L.! It’s the sort of movie that wants to be E.T. or WarGames, but would probably settle for being Short Circuit or Flight of the Navigator, and doesn’t even manage that! As 80s kidventure pictures go, it’s pretty dry – it tastes like a mouthful of wicker!
It does open with a car chase, however! Actually it’s a car being chased by a helicopter, and the car soon goes off a cliff, but not before depositing a young, brown-haired boy, D.A.R.Y.L.! D.A.R.Y.L. is soon picked up by the Barkington Youth Center, and he just as quickly becomes the foster child of Barkington residents Mary Beth Hurt and Michael McKean! With his unmatchable manners, his ability to hit home runs, and his thrilling aptitude at Pole Position, D.A.R.Y.L. is soon the toast of Barkington! No, D.A.R.Y.L. is someone the good people of Barkington will not soon forget!
But of course D.A.R.Y.L. is no ordinary moppet! Ha ha, his name’s an acronym for starters, and then there’s that computer in his head! The movie is a bit vague on what sort of robot he is - is he a Terminator, a Roy Batty, a Bishop, a Data? - but he’s a robot of some kind, and when his new family and real-boy best friend Turtle eventually find this out it hardly even makes them blink! Such are D.A.R.Y.L.’s powers of ingratiation!
D.A.R.Y.L. was created by laboratory scientists because for some reason the Pentagon wanted to create armies of polite little boys who excel at video games! The scientists, in the guise of D.A.R.Y.L.’s real parents, take the artificial lad away from his foster parents, which makes everyone sad, but the main scientist, played by Josef Somer of Target, quickly decides that he has become a real boy after all, and, like his colleague at the beginning of the movie, smuggles the lad out of the research facility and absconds with him! A ludicrously trigger-happy cop puts an end to this relationship (the most touching of the film), but D.A.R.Y.L. simply steals America’s most sophisticated fighter jet and flies home to Barkington!
Oh, this movie! I wish the darn thing was better, because it had some potential! But the direction, I’m sorry to say, lacks any style at all, and barely any pep! There’s one car stunt and a lab set that briefly hit the mark, but that’s about it! The performances are pretty lifeless, with the actor playing D.A.R.Y.L. conveying D.A.R.Y.L.’s uncertainty about human ways by wearing a constant expression of imbecilic bewilderment! It feels like chunks were cut out because the scriptwriters could not figure out how to deliver narrative points in an efficient way! (In this it resembles contemporaneous Paramount product like Blue City and Summer Rental, and helps undercut the studio’s mid-80s reputation as a slick and ruthlessly efficient entertainment factory!)
If it’s supposed to be Pinocchio, they left out all the traumatic temptation and lesson-learning undergone by the wooden lad, and whatever blue fairy is meant to hasten D.A.R.Y.L.’s transformation to a real boy is here left offscreen! There also seems to be a great deal of geographical confusion: is Barkington in the Pacific Northwest, or maybe is it in Florida? Ha ha, there’s evidence to suggest both! (In fact, much of it was shot in the U.K.!) It’s always nice to see an 80s movie with the military-industrial complex portrayed as the unalloyed baddies they are, though, but this bright spot alone is not enough for me to give D.A.R.Y.L. anything more than one round of Pole Position!
Posted by Burl at 07:58