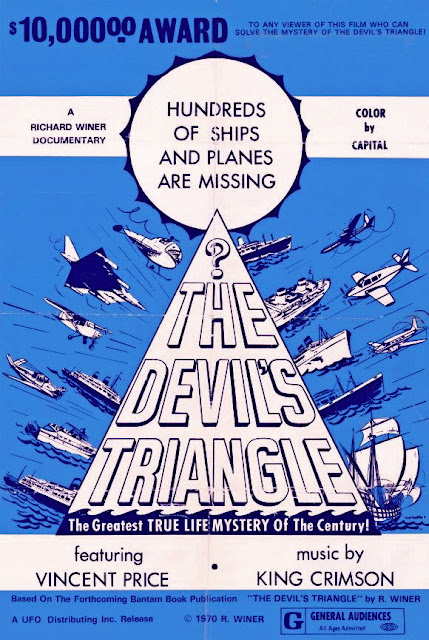 Kchshsh, Burl transmitting! Can you read me! Ha ha, I think the odds are likely that I’ve flown through the Bermuda Triangle more than once, and yet here I am, having survived these risky journeys through the unknown, to write you a review for a late-70s goof-doc highlighting the final journeys of some who were not so lucky! Ha ha, yes, it’s The Devil’s Triangle!
The Bermuda Triangle was a big deal in the 1970s, and a filmmaker called Richard Winer obviously knew a winning gambit when he saw it: make a mid-length documentary about the phenomenon, use all sorts of stock footage, some po-faced interviews, a few re-creations, a droney theme tune by King Crimson, a briefly psychedelic flashback and an exploding model boat to tell the story - and then hire Vincent “Dead Heat” Price to narrate it all! Ha ha, Price does the job perfectly with that high-born voice, and sounds like he’s been offered a bonus for every time he can work in the words “The Devil’s Triangle!” in a tone of barely-controlled alarm!
It’s a little weird, actually: the words “Bermuda Triangle” are never uttered once in the picture! It’s as though Winer had decided to coin a new term for some reason, or else was prohibited by court order to use the established nomenclature! It feels like poor Price is being forced to talk around something that everybody already knows the name of, and I’m afraid the ruthless determination to speak only of The Devil’s Triangle undercuts one’s willingness to accept all of the movie’s propositions!
Many well-known cases are considered! Of course we get the full story of the Lost Squadron, the routine patrol flight that went out, send back a few cryptic, garbled messages, then vanished for all time, never to be seen again! There’s the more historical account of the Japanese freighter that only had time to radio “Danger like dagger now!” before never being heard from again! Some stories were unfamiliar, at least to laymen like ol’ Burl, and you can see why! For example, there’s the one about the guy and his buddy the priest who lay their cabin cruiser just a mile off Miami to look at the lights of the city, call in a complaint that there was a hole in their hull, and then aren’t there anymore by the time the Coast Guard comes to investigate! Ha ha, it’s not the most thrilling tale, that one!
In what was probably considered a big get for the documentary, Winer interviews the pilot who stayed behind while his Lost Squadron patrolmates went out into oblivion! There’s a real human story here, or the potential for one, about survivor’s guilt, obsession, and the unevenly-toothed gears of fate! But the movie engages with none of these, presenting instead a ghostly roll call in which the survivor’s name is repeated as though he’s the one who’s absent!
This bit is a waste of time (of which this brief picture has only fifty-two minutes’ worth in total), but where we do get a few frissons of creepy mystery is in some of the radio messages sent back from, apparently, the void; or the scary portraits of sailors in panic; or the home movie footage, which Price assures us is genuine, of a sailing yacht under the skipperage of a famous millionaire in the last few days before disappearing forever into uncertain geometries!
The picture gives equal consideration to all theories attempting to explain this terrifying isosceles! Could it be a gateway to another dimension, an electromagnetic anomaly, a curse of long standing, or simply a space alien kidnap zone? One thing it absolutely cannot be, the movie asserts with utter certainty, is coincidence, or anything so banal as rough weather! Ha ha, surely not!
When I was very young, I would be sent down to the neighbourhood movie house, the Park, every Saturday afternoon to see whatever was playing, and sometimes it would be something just like this! So I have a fondness for these 70s-era tabloid docs, even if they’re always clunky, frequently dull, and never very convincing! On balance, and largely because of Price, and this residual affection I have for the form, I’m going to give The Devil’s Triangle two sudden squalls!
Posted by Burl at 18:34