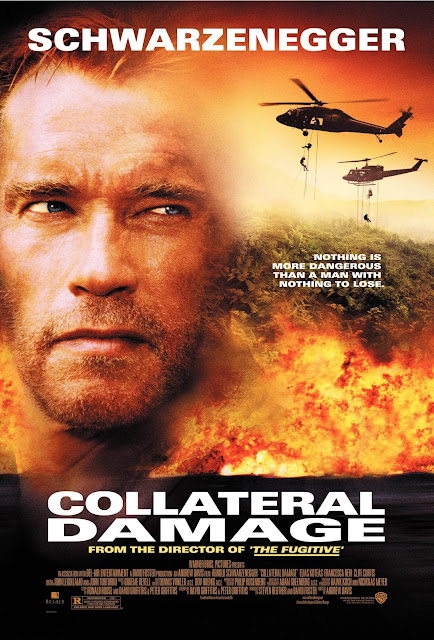 Burl here to fill you in on action-drama! Yes, the picture I’m reviewing for you today is Collateral Damage, an Arnold Schwarzenegger movie, one of the last he made before taking his hiatus from movies and becoming a ho-hum governator! This is one of those movies that was made before 9/11 and came out afterward, and it achieved a modicum of notice thanks to its scenes of bombs going off in public places and victims lying around covered in bloody sheets! For the briefest of moments the public mood was against such pictures, and the makers of Collateral Damage were not sure what to do! In the end they released their movie, but played down the terrorist elements in the advertising so as not to upset people! However I’m sure they toyed with the idea of playing them up instead: here, they might have insisted, you will see Arnold going after proxy versions of the real-life terrorists who have so upset America, and making them pay, pay, PAY!
That could have meant big box office bucks, I suppose, but the gang at Warner Bros., under the shadow of a history-making terrorist attack, chose to resist looking like tasteless mercenaries for the sake of a few dollars! Perhaps, too, they knew they had a bit of a clam on their hands, one which would have hardly satisfied the action junkies looking for cathartic vengeance!
Arnold plays Gordie Brewer, Los Angeles firefighter: once again a heavily-accented man with a mysteriously Anglo name! (This incongruity, so easily accepted in Schwarzenegger pictures by now, is put into sharper focus later in the movie, when Arnold briefly goes undercover as “Heinrich Beckmann,” German mechanic!) Gordie’s workaday world is shattered when his wife and young son are blown up by a Colombian terrorist known as The Wolf, who issues threats using a voice-altering device that makes him sound like André the Giant and who has targeted some US and Colombian officials! Once the chaos subsides, Gordie’s family are simply dismissed as, you guessed it, collateral damage!
Well that’s not good enough for Gordie! Forsaking his razor he makes his way to Colombia, and after several misadventures, and a stint in a South American jail, and encounters with John "Barton Fink" Turturro (playing the world most unlikely Canadian) and John "Die Hard 2" Leguzamo (playing a manufacturer of mind drugs) he finds The Wolf’s compound! But The Wolf finds him too, and in the course of their conflict there occur several explosions, some engineered by Gordie and others by CIA spook Elias “Some Kind of Wonderful” Koteas! Our tale ends in Washington, where there will be further explosions and an action climax involving indoor motorcycle riding and violence fights!
As in so many of the Arnold movies in which he’s supposed to be a more or less everyday fellow, the picture works overtime in establishing his quotidian qualities, and tries manfully to resist turning him into a superman in the action scenes! For me, Arnold is better off in his more unflappably robotic roles, like Commando or Predator or most especially, and literally, The Terminator, in which he’s less likely to issue the panicked bellow that always bursts forth whenever he’s playing an everyday man in trouble, falling down or being blown through the air by an explosion or whatnot!
At times Collateral Damage, with its confused geopolitics and cake-and-eat-it-too view of American foreign policy, seems like a holdover from not just the 90s, but from further back still, right to the darn Reagan era! The action is middling at best, the story unsatisfying, and the execution plodding! It’s a forgotten mediocrity, and I almost regret reminding you of it here! Ha ha, sorry ‘bout that! I give Collateral Damage one Metallica t-shirt!
Posted by Burl at 09:35