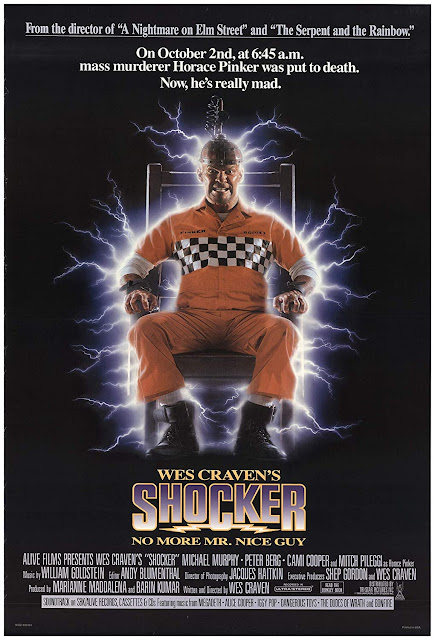 Zip zap it’s Burl, here to review a Wes Craven picture; and not, I’m sorry to say, one of his good ones! No, instead it’s Shocker, a movie that’s shocking mostly for how galactically silly it is! It’s clear that with this effort, old Wes was trying to recapture the magic of the marvelous A Nightmare on Elm Street, but he succeeded instead in recapturing the magic of Deadly Friend!
And somehow, you know, he really didn’t even do that, because though Deadly Friend is bad, it still manages to be what David Lynch calls a “neighborhood film,” and Shocker, though it be set in a neighbourhood, does not! But Shocker is still not without its own peculiar charms, like some goofy trick effects and a late-film innovation that takes the film from a wacky but still apparently serious horror picture into the realm of high-concept silly-fi!
It seems that the town is beset by a monstrous serial killer who, like the fellow in Manhunter, will invade a home and kill the entire family within! Our main character, Jonathan, a teen with a face like one of the aliens from Close Encounters of the Third Kind, has some sort of mental connection with the killer, who turns out to be a TV repairman named Horace Pinker! This fiend has committed numerous outrages, and the police are at a loss how to catch him despite the fact that, during his killings, Pinker always parks his van with PINKER’S TELEVISION REPAIR emblazoned across the side directly in front of whatever house he’s targeted!
With the teen’s help Pinker is caught, but not before killing the family Jonathan was adopted into a dozen years earlier! Yikes, another family massacre! After some ritualistic shenanigans held in his cell before a TV, Pinker gets the chair! But ha ha, he’s got something up the sleeve of his checkered boiler suit: he turns into energy and escapes into the wiring! Then he takes over the bodies of a series of people, including that of a little girl, and then her mother, and then a pick-axe waving city worker! Much is made of the novelty of a sweet-looking but foul-mouthed six year-old bent on murder! Finally Pinker rediscovers his first love, television, and becomes some kind of program-hopping imp who can appear on the news, or in a Leave It To Beaver rerun, or anything! Then the ghost of Jonathan’s girlfriend appears, the movie achieves a sort of apotheosis of silliness, and the movie ends!
This is all pantomimed out with perfect seriousness by Peter Berg in the role of Jonathan (Berg being one of those handsome-boy actors, like John Stockwell from Christine, who decided to pack it in and become a director), Michael Murphy from Cloak & Dagger as the pathologically cynical father, and Mitch Pileggi from Return of the Living Dead 2 as the ridiculously violent killer! But their seriousness only makes it all sillier, ha ha!
I know I’ve made much of the gooftastic nature of this picture, but that really is its defining characteristic, and the occasional flashes of self-awareness mitigate this not a whit! It’s no A Nightmare on Elm Street and it isn’t even A Nightmare on Elm Street 2; and though the rain falls softly upon Wes Craven’s premature grave, I have to give Shocker just one and a half stretch-lips!
Posted by Burl at 17:51

Email ThisBlogThis!Share to TwitterShare to FacebookShare to Pinterest
Labels: 1980s, Craven, horror, saw it on the big screen, slasher, supernatural