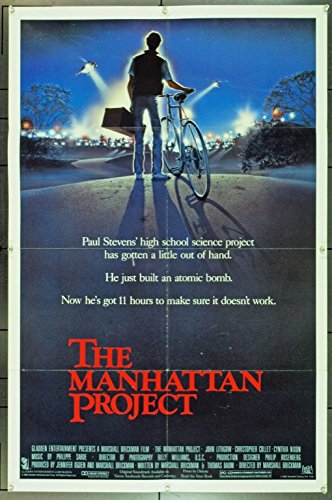 Hi, it’s Burl! Do you like movies about science lads? Ha ha, I sure do! And there was no greater boom in this little genre than in the mid 1980s, when movies like Weird Science, My Science Project, Real Genius, Deadly Friend and Flight of the Navigator came out! And don’t forget D.A.R.Y.L.! Well, one of my favourites of the bunch is a lesser-known one, not as goofy or fantastical as most of the others, but very sciencey! It’s The Manhattan Project, a picture made by Woody Allen’s one-time crony Marshall Brickman!
The film is set pleasantly in Ithaca, New York, where atomic laser scientist John Lithgow has just set up shop to secretly make plutonium for the government! Meanwhile a local science lad, named Paul as so many of them are, catches wind of this operation when the affable Lithgow starts asking his mom out on dates! Ha ha! In concert with burgeoning girlfriend Cynthia Nixon, Paul decides to expose the true workings of “Medatomics Company” by stealing some of its plutonium and constructing his own nuclear bomb! Oh, ha ha!
In its first half the picture offers up a quite decently done heist in science lad clothing! Paul may be a little cleverer than is realistic - his heist, which is quite complex, is conceived of, planned, equipped and pulled off all in the time it takes for a thunderstorm to pass through town - but the writing, and the performance by Christopher Collett as Paul, keep things reasonably grounded!
And as with all the best of the science pictures, this one offers up some not-so-veiled criticism of America, the Reagan administration, and the military-industrial complex to which they were all in thrall! By the time army man John Mahoney and his legion of snipers come busting in, not in the least reluctant to kill Paul in order to get his nuclear device from him, one is as unsure of Paul’s motivations as ever, but is nevertheless convinced he’s somehow in the right! And ha ha, while there’s a happy ending in which Mahoney lets Paul go and just flies away, we can’t escape the conviction that he’s looking at more than a few years in the federal pokey!
The picture is a solid piece of craftsmanship, well acted and laced with plenty of welcome humour! It probably benefits from not trying to be Spielbergian in any fashion - the chase through the New York hotel with science lads pursued by feds recalls E.T. only by accident, and doesn’t involve BMX bikes! Otherwise the picture doesn’t rely on action shenanigans at all, and spends a lot more time debating ethics than Spielberg or his acolytes would have!
I saw this one in the movie theater, and enjoyed it! I’ve been watching it lately with my son and it’s still a good-natured bit of brinksmanship! Ha ha, I give The Manhattan Project two and a half television T-shirts!
Posted by Burl at 00:48